Meet the hero of Ganjam - the eye of Cyclone Phalin landfall! 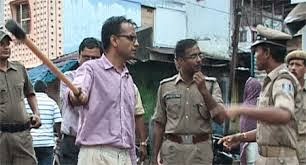 (TimesofIndia) The worst is over but Ganjam collector Krishan Kumar was not thinking of sleep yet on Sunday. He is the man of the moment and has gone without sleep for close to 96 hours.

The southern Odisha district was pummelled by Cyclone Phailin on Saturday but thanks to an alert administration human casualties have been reported to be in single digit so far.

"Our aim was to keep casualties to a minimum. Hence, we did everything we could to evacuate people from close to the coast," Kumar told TOI.

While an estimated 10,000 people died in the 1999 super cyclone, Cyclone Phailin has claim nine lives so far going by preliminary reports.

Kumar, who had won accolades after effectively controlling widespread ethno-communal riots in Kandhamal district in 2008, attributed the success in reducing loss of human lives to the sincere efforts of his team of officers and police as well as to micro planning.

'We started preparations from Wednesday (October 8) as soon as we got warning of the impending calamity," he said.

"From identifying the vulnerable areas to designating 1060 government buildings as cyclone shelters and readying plans for post-disaster relief and restoration efforts, we did everything in quick time," added the MBBS degree holder.

The task before the administration was to implement the plans on the ground. Kumar along with senior police officers Amitabh Thakur, Ashis Singh, Anirudha Singh and others worked almost non-stop, visiting village after village to ensure people were moved to safe locations.

"We didn't want anybody within 10 km off the coast. We create necessary awareness and applied pressure. Reluctance was natural and we encountered problems. Finally people gave in," noted the 2002 batch IAS officer.

By Saturday about 1.4 lakh people were officially evacuated. By 4 pm, thousands poured in to the cyclone shelters which housed an estimated 3.5 people through the night.

At 5 am on Sunday, the collector and his team were back on their toes, as the storm showed signs of abating. They said by evening the road communication would be restored. And so it was accomplished. The next big challenge is relief and restoration, he said.

"Relief will peak up from Monday. Once we get the loss assessment reports, we will complete restoration within a deadline. After all, Ganjam has to show the resilience and stands tall once again," he added.

Posted by Rajan Alexander at 1:08 AM