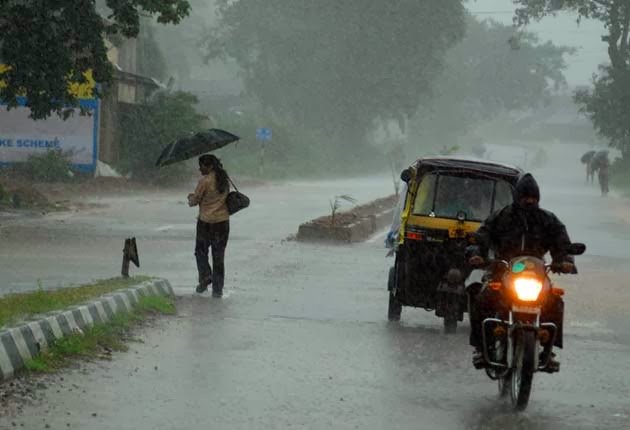 (HindustanTimes) IMD director general LS Rathore said Phailin was heading toward the coastal region at a speed of 20km per hour and the department expected gusting winds of 235km per hour at the time of the landfall.

He said the cyclone will sustain for six hours and its impact will be felt for the next 24 hours.

Referring to the controversy over the speed of the cyclone, he said the foreign forecasting agencies have endorsed the IMD’s assessment, while rejecting suggestions that the department had underestimated its impact by calling it a “very severe cyclonic storm” rather than a super cyclone, like the devastating 1999 cyclone that killed nearly 10,000 in Odisha.

“You should have faith in the institutions of the country,” Rathore told a press briefing.

Rathore said rains are expected in Jharkhand, Bengal, east UP, Bihar and parts of Madhya Pradesh.

A total of 440,000 people have been evacuated from Odisha and Andhra Pradesh in one of the biggest such exercises in the country's history, the national disaster agency said on Saturday.

"The total is 4.4 lakh (4,40,000) in all this," Marri Shashidhar Reddy, a top official from the National Disaster Management Authority, told a press conference.

Ganjam, along Andhra Pradesh border, would be most vulnerable to the landfall while six other districts like Kendrapada, Jagatsinghpur, Puri, Khurda, Balasore might be severely affected.

Since the morning the wind speed in Gopalpur has increased phenomenally up to 70 km per hour. The wind speed is consistently increasing in other affected areas also.

In Jagatsinghpur district, which was the worst sufferer of 1999’s super-cyclone, the cyclone shelters were crowded as hordes of people spontaneously reached there. People, however, were still reluctant to move from their houses in Ganjam since they had not seen the devastation of super-cyclone.

“We will weather the storm,” said Seetha Reddy, a fisherwoman in Gopalpur who was reluctant to leave her kutcha house, but was forced by the police to shift to a shelter.

“We have already evacuated more than 3.71 lakh people from affected districts. All the people in villages coming under five kilometres area of sea shore have been evacuated. We have even used police force to evacuate people in Gopalpur,” Odisha revenue minister SN Patro said.

Rain and strong wind lashed across Odisha, severely in affected districts, due to the impact of the incoming cyclone flooding streets in urban areas like Berhampur and Bhubaneswar.

Odisha recorded incessant rainfall from Friday midnight. A government official said on Saturday morning that efforts on war scale were on to evacuate another 3 lakh before noon even as a woman was reportedly killed in Bhubaneswar after a tree fell on her.

Around 18 fishermen, who had gone to sea 2-3 days ago from Puri district in Odisha, were reportedly stranded and officials were trying to establish a link with them.

On Saturday, most of the flights to and from Odisha were cancelled, said Sarat Kumar, director of Biju Patnaik Airport.

"The weather is getting worse due to the cyclone. And for passenger safety, flights will be cancelled till the weather improves. There are almost 20 flights, out of which 15 flights have been cancelled. Permission for landing is subject to weather conditions," he said.

In Andhra Pradesh, as many as 52,000 locals were evacuated and 25,000 people accommodated in cyclone shelters in Srikakulam district on Saturday in view of the cyclone that is expected to cross the shore by Saturday evening.

At least seven fishermen who went fishing have not returned in the Icchapuram region.

Heavy rain in Srikakulam forced the authorities to cancel trains and planes to the district.

In its bulletin on the cyclone, issued at 11am on Saturday, the Indian Meteorological Department (IMD) issued a 'Red Message' warning for North Andhra Pradesh and Odisha Coast about the 'very severe cyclonic storm Phailin' which is now over west-central and adjoining east-central Bay of Bengal.

The IMD also advised fishermen out at sea along north Andhra Pradesh, Odisha and West Bengal coast to return to coast, adding that "Fishermen are advised not to venture into sea," instructing total suspension of fishing operations.

Posted by Rajan Alexander at 6:16 PM