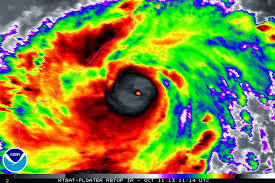 "Cyclone #Phailin has made landfall near Srikakulam, Andhra Pradesh, India. The strongest winds, rain, & surge will be felt NE of landfall."

However, there seems to be some respite as the cyclone has touched land at the time of low tide.

He also said that the eye of the cyclone, that is the centre part of the cyclone, also the most powerful, will still take about an hour to touch the coast. There are still 4-6 hours of strong winds after that, he tweeted.