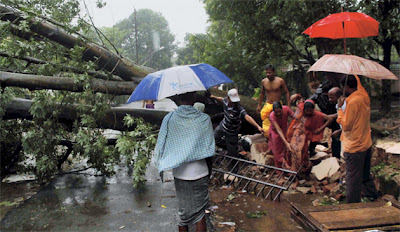 (Railwaytickets.org) The strongest such storm to threaten the country since 1999, Cyclone Phailin, is approaching its east coast as authorities have moved tens of thousands of villagers from their homes to government shelters inland.

There are reports that gusts could near 200 miles per hour. A cyclone of similar strength 14 years ago killed 10,000 people.

Children’s charity World Vision said its teams on the ground were already seeing signs of the storm.

Dharmendra Naik, manager of its programmes in Jagathsinghpur district, said:

“Our staff along the coast have been seeing rain falling continuously and winds pick up. People have been trying to stock up on essentials and that has caused the price of many items to be driven higher.”

Kunal Shah, the head of the charity’s emergency response in India, said:

“In a storm of this magnitude there is the potential for widespread damage to crops and livestock in the low-lying coastal areas and houses completely wiped away. So while we are praying this storm loses intensity, we’re also preparing.”

Several of the charity’s programmes a re in the direct path of the cyclone. Staff have been alerting communities and providing megaphones, life jackets, torch lights and ropes to the Community Task Force, which consists of men, women and youngsters from within the community who are trained in disaster preparedness including search and rescue, basic first aid and protecting livestock.

Save the Children said it was on the ground in Odisha where the cyclone is expected to hit, stockpiling emergency supplies including food, health and hygiene kits and tarpaulin sheets.

“Children are particularly vulnerable during emergencies and their specific needs must be considered by the humanitarian community. Child protection must be the prime concern of the government, relief agencies and parents.”

Families directly in the path of the storm have been evacuated to safe areas by government agencies. District heads have been asked to stockpile food, medicine and other aid in case needed.Mr Kunduru said:

“Plan is working in co-ordination with the government and other humanitarian actors to meet the food, shelter, water, protection and education needs of those affected.”

The Indian Meteorological Department warned that Phailin was a “very severe cyclonic storm” that was expected to hit with maximum sustained winds of 130-135 miles per hour.

However, the US Navy’s Joint Typhoon Warning Centre in Hawaii forecast maximum sustained winds of 167 miles per hour with gusts up to 196 miles per hour.

University of Miami hurricane researcher Brian McNoldy said that Phailin is near the size of 2005′s Hurricane Katrina, which killed 1,200 people and caused devastating flooding in New Orleans, and it also has the wind power of 1992′s Hurricane Andrew, which had 165mph winds at landfall in Miami.

If the storm continues on its current path without weakening, it is expected to cause large-scale power and communications outages and shut down road and rail links, officials said. There would also be extensive damage to crops.

Satellite images of the storm showed its spinning tails reaching nearly 1,000 miles from the east coast of India to the west coast of Burma, an area roughly the size of France.

Devendra Tak, of Save the Children, in Puri, Odisha, said:

“Our plane took four attempts to land in Bhubaneswar on Saturday morning because conditions were so bad – and as soon as we disembarked they shut the airport.

“As we drove towards the coast we passed uprooted trees, damaged houses and towns like ghost towns as most people had been evacuated to cyclone shelters. When we got to the coast the waves were extremely high – the sea was like a cauldron of boiling water.

“It’s getting windier and the rain is increasing hour on hour. The cyclone is about to make landfall any time now and we will begin to know the extent of its damage overnight.”

Oxfam said that in villages where it works, people have been evacuated to safe shelters.

Its contingency stock of water sanitation materials are on standby and ready for deployment, and Oxfam India humanitarian hub has staff on standby for assessment and initial immediate response in the affected areas. Speaking from Bhubaneswar, Ghasiram Panda, of ActionAid, said:

“ActionAid has authorised the purchase of food, bottled water and other essential items such as soap and sanitary products for evacuees.

“Scarcities of food and a lack of clean drinking water are already being reported by our teams on the ground and with the storm not expected to be over until midday Sunday, protection of children, pregnant women, the disabled and the elderly is a priority.”

Posted by Rajan Alexander at 9:07 AM