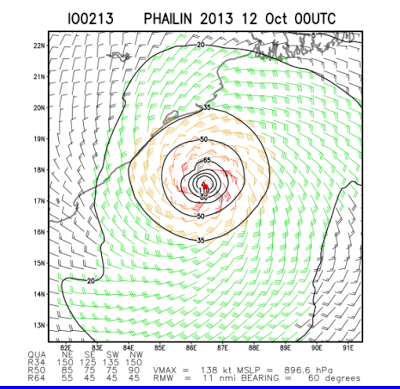 The latest wind profile map was made available on 12 Oct 2013 at 0000 UTC, or slightly more than three hours ago. This map depicts the area covered by various wind velocities, reported in knots (nautical miles per hour). The area of 34-knot winds, which approximately convert to tropical-storm-force winds (about 40 MPH), were just coming onshore in this latest map. Various sources have predicted Phailin's landfall to occur around 1200 UTC, or about 12 hours after the time of these mapped observations.

The text provided below this map provides important information about tropical cyclone size, maximum sustained wind speeds and minimum central pressure. The maximum wind speed of 138 kts converts to 158 MPH, which still places Phailin above the threshold for a category-5 tropical cyclone, according to the Saffir Simpson Hurricane Wind Scale.

The RMW value of 11 nm refers to the radius of maximum winds, which is a measure of the distance from the center of circulation to the strongest winds in nautical miles. More powerful tropical cyclones tend to have smaller RMW sizes. In comparison, the RMW size of Hurricane Camille was 8 nm, while the RMW size for the Labor Day Hurricane was only 6 nm. These were some of the smallest RMW values of any hurricanes to ever strike the U.S.

Finally, the small table of values on the bottom left refer to the radius of 34-kt, 50-kt and 64-kt winds. The 34-kt winds convert to tropical-storm-force winds (approx 40 MPH) and 64-kt winds convert to hurricane-force winds (approx 74 MPH). The size of these wind swaths appears to have increased steadily over the past 18 hours. Now the radius of 64-kt winds extends out 55 nm and the radius of 34-kt winds extends out 150 nm from the center of circulation. These values are very close to the average size values we found in recent storm surge study conducted for the U.S. Gulf Coast.

SCIPP is very close to completing two cutting-edge studies that use robust tropical cyclone size and wind data, as well as data from SURGEDAT, the world's most comprehensive storm surge database, to better understand how tropical cyclone size and winds influence storm surge heights. Without spoiling the end of the movie for you, I will tell you that we found both pre-landfall tropical cyclone wind speeds and storm size significantly influence surge heights. In other words, both the pre-landfall maximum sustained wind speeds and the storm size are important for generating storm surge, which is why the information on this NOAA website is very useful for better understanding the variety of wind and surge hazards that Phailin could produce.

Posted by Rajan Alexander at 9:40 AM