Arctic environment by the middle of this Century

Dr. Nils-Axel Mörner, as head of Paleogeophysics & Geodynamics at Stockholm University, worked with sea level problems for 40 years in areas scattered all over the globe; published 546 scientific papers and 10 books on the subject. He was the former President of the INQUA Commission on Neotenotics (1981-89) and INQUA Commission on Sea Level Changes and Coastal Evolution (1999-2003.) He headed the INTAS Project on Geomagnetism and Climate (1997-2003). In 2000 he launched an international sea level research project in Maldives.

At around 2040-2050 we will be in a new major Solar Minimum. It is to be expected that we will then have a new “Little Ice Age” over the Arctic and NW Europe. The past Solar Minima were linked to a general speeding-up of the Earth’s rate of rotation. This affected the surface currents and southward penetration of Arctic water in the North Atlantic causing “Little Ice Ages” over northwestern Europe and the Arctic.

Both ACIA (2004) and IPCC (2001) predict a unidirectional opening of the Arctic. This is repeated in the last IPCC-report (2007). This has affected economical and trading scenarios, too. We often hear that, by year 2050 (if not even before), the Arctic will be ice-free allowing trans-Arctic voyages.

Karlén (2008) showed that there hardly is anything unusual going on in the Arctic region today, rather variations of the same type as recorded throughout the Holocene. Furthermore, he found those variations quite similar to the changes in solar activity as recorded by the atmospheric 14C-variations.

Höpner Petersen (1984) has shown that the low summer sun with only around +3- 9° C air temperatures cannot compensate the heat loss during the Polar nights with air temperatures at minus 20-40° C. Therefore, he argues that air temperature cannot melt polar ice, only ocean water-heat may do this. He states (Höpner Petersen, 2010) “Millions of years with polar nights created the deep, polar oceans, the polar currents and the polar life systems. The solar system controls the polar nights and their influence on the global climate in periods from tens, to hundreds, to thousands, to millions of years.”

In 1984, I launched the theory that angular momentum might be transferred back and forth between the solid Earth and hydrosphere; affecting primarily the surface circulation of the main ocean currents, and especially the Gulf Stream and Kuro Siwo Current which bring oceanic water masses from low to high latitudes (Mörner, 1984a, 1984b). This was followed up in a series of papers (Mörner, e.g. 1988, 1995, 1996a, 1996b). I then realized that the Solar Wind might affect the rotation of the entire terrestrial system (Mörner, 1996b, 1999). The Solar minima were found to correspond to periods of speeding-up of the Earth rate of rotation (Mörner, 2010). 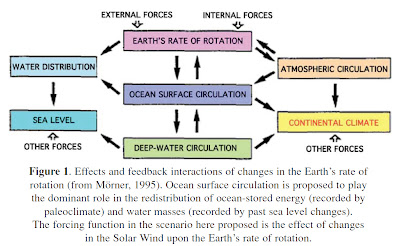 Changes in the Earth’s rate of rotation and their feedback interactions are illustrated in Figure 1. Many variables are interacting. Changes in the oceanic surface circulation are proposed to play the dominant role with respect to centennial and multi-decadal changes in climate (Mörner, 1995). Variations in the Solar Wind are held as the external driving force (Mörner, 2010).

Long ago, Eddy (1976) proposed that Little Ice Ages occurred at periods of Solar minima. Indeed, there seems to be a good correlation between cooling events over northern Europe, the North Atlantic and the Arctic. During the Spörer, Maunder and Dalton Solar Minima, Arctic water was forced southwards all the way down to Mid-Portugal and the adjacent land areas experienced “Little Ice Ages” (Mörner, 1995, 2010). At the same time, however, the Gibraltar and NW Africa experienced warm events. This North–South opposed climate conditions are well understood in terms of differential distribution of current flow-masses along the northern and southern branches, respectively, of the Gulf Stream (Mörner, 1995, 2010).

The relation among centennial solar maxima/minima cycles, the Earth’s rate of rotation and the changes in dominant ocean surface current activity in the North Atlantic is illustrated in Figure 2. Today, we are at the end phase of a Solar Maximum and in some 30-40 years we will be in a new Solar Minimum. This paper will discuss the optional scenarios for the changes in climatic conditions in the Arctic within this century, with special regard to the effects of solar variability. 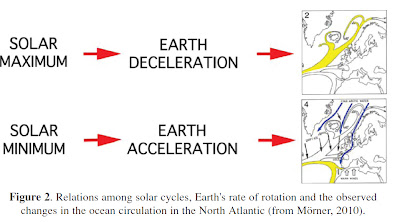 In the Global Warming scenarios (IPCC, 2001, 2007; ACIA, 2004) the Arctic will face a unidirectional arming. By the middle of this century, the Arctic is said to become ice-free (Figure 3A). This statement has lead economists and businessmen to postulate new trading routes and political competition within the Arctic. This concerns natural resources like oil and gas, water for fishing, location of potential harbours, etc.

In these scenarios, little or no respect is paid to the natural variability in climate, and the solar-terrestrial interaction.

THE SUN IN THE CENTRE

If we “put the Sun back in the centre” (Mörner, 2006a, 2006b) – in analogy to what Copernicus did in the 16th century with respect to the old Aristotle’s and Ptolemaist geocentric concept – the prospect of the Arctic will be totally different, however (Figure 3B). 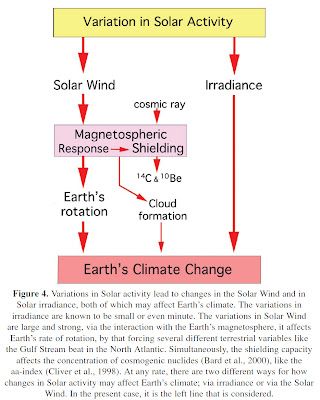 It is common knowledge that the Earth is predominantly heated from the Sun. Any variation in the solar activity might, therefore, be a potential factor for changes in the terrestrial climate.

The 11-year sunspot cycle is well known phenomena, and so are, to a lesser degree, also the 22-year cycle, the 80 year Gleissberg Cycle (sometimes even given as 60 year), the 120 year VMV Cycle and the 240 de Vries Cycle. The search for those cycles in terrestrial variables has a long history (e.g. Schove, 1983; Sanders & Fairbridge, 1995; Finkl, 1995). Still, the matter was far from clear.

Friis-Christensen and Lassen (1991) established an excellent correlation, for the last 150 years, between changes in the length of the sunspot cycle and general changes in global mean temperature. This gave evidence of a strong solar-terrestrial linkage, despite the fact that the physics behind this linkage remained unknown.

The observed solar-terrestrial interactions have been interpreted in the following three ways, illustrated in Figure 4.

The solar-terrestrial interaction is often explained in terms of variations in irradiance over the sun-spot cycle and it multiples (e.g. White et al., 1997). The variation in energy output during a sunspot cycle is found to be far too low, however, or only in the order of 0.2 % (Willson, 1997). Therefore, this mechanism does not apply per se. Only by assuming unknown and hypothetical amplifying forcing-functions may it be converted to effects large enough to explain observed changes in climate (e.g. Lean et al., 1995).

In a number of papers, Svensmark (e.g. 1998, 2007) has proposed that Earth climate may be strongly controlled by cloud formation driven by cosmic rays which, in its turn, is modulated by the interaction of the Solar Wind with the Earth’s geomagnetic field. Svensmark has proposed that this mechanism is responsible not only for the short-term changes in climate, but also for the long-term changes through-out the Earth’s history (Svensmark & Calder, 2007). This is a splendid new theory.

Changes in Earth’s rate of rotation due to Solar Wind changes is a novel concept (Mörner, 1995, 1996b, 2010; Gu, 1998; Mazzarella, 2008), but several authors have noted a correlation between sunspot activity and Earth’s rotation (e.g. Kalinin and Kiselev, 1976; Golovkov, 1983; Mazzarella and Palumbo, 1988; Rosen and Salstein, 2000; Abarca del Rio et al., 2003; Mazzarella, 2007, 2008; Mörner, 2010, Le Mouël et al., 2010) or Solar-planetary cycles and Earth’s rotation (e.g. Scafetta, 2010). Due to the changes in rotation, the oceanic surface current system is forced to respond (Figure 1). As a function of this, the Gulf Stream alters its main distribution of water along the northern and southern branches, and simultaneously cold Arctic water can, at the speeding-up phases of Solar Minima, penetrate far down along the west coasts of Europe creating Little Ice Age environmental conditions (Figure 2).

Alternatively, a planetary beat (cf. Mörner, 1984a) may act not only on the Sun causing its variations in time, but also directly on the Solar Wind interaction with the magnetosphere by magnetic torques and/or by gravitational forces on the Earth’s rate of rotation (Scafetta, 2010). The correlation between the 60 years terrestrial LOD cycle and the 60 years cycle of changes in the orbital speed of the Sun around the centre of mass of the solar system (SCMSS) is striking (Scafetta, 2010, Fig 14).

Whatever, it is the response in oceanic circulation that generates the changes in climate (Mörner, 1995, 1996b, 2010) illustrated in Figure 1 and 2.

Finally, there are all reasons to believe that mechanism 2 and 3 may interact and operate simultaneously.

The Solar activity follows cyclic patterns, and can fairly easily be extended into the future. What happened in the past will also happen in the future. The combination of cycles can be done in different ways. Originally, we used a combination of the 60 year “Gleissberg” and 240 year De Vries cycles for the past 600 years and extended it into the Future giving a new Solar Minimum at around 2040-2050 as given in Figure 5 (Mörner et al., 2003; Mörner, 2003, 2006a, 2006b, 2007).

Later, I use the Solar Irradiance curve of Bard et al. (2000), noting that this curve, in fact, rather should be labelled “a Solar Wind Curve” as it is constructed from the variations in cosmogenic nuclides controlled by the variations in shielding capacity of the Earth’s geomagnetic field as given in Figure 4 (cf. Mörner, 2010). Along this curve (Figure 6) I have marked the changes recorded between Gulf Stream stages 2 (above) and 4 (below) situations as given in Figure 2 (cf. Mörner, 2010). In the middle of this century (at about 2040-2050), we should, by cycle extrapolation, have a Future Solar Minimum when the past Gulf Stream situation should repeat; i.e. we would have a new stage 4 situation with “Little Ice Age” conditions in Europe and in the Arctic (Figure 7). 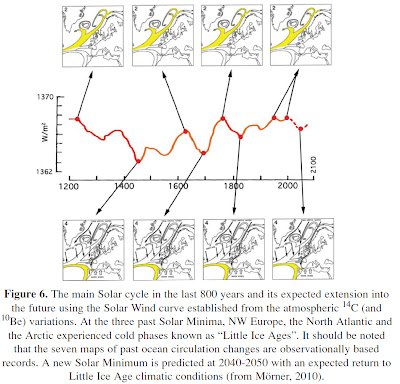 This is in sharp contrast to the scenarios of IPCC (2001) and ACIA (2004), which predict a unidirectional continued warming leading to the opening of the Arctic basin within this century. Their prediction is based on modelling excluding the effects of the Sun, however.

Personally, I am convinced that we need to have “the Sun in the centre” (Mörner, 2006a, 2006b), and doing so, we are indeed facing a new Solar Minimum in the middle of this century. Whether this minimum will be as the past three once were (Figure 6), or it will be affected by anthropogenic factors, is another question. 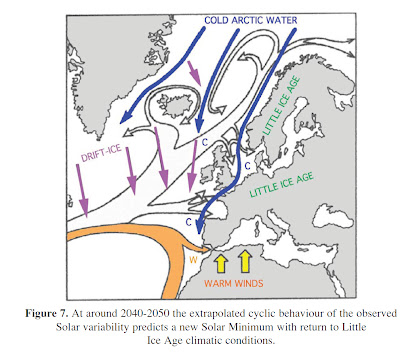 At any rate, from a Solar-Terrestrial point of view, we will, by the middle of this century, be in a New Solar Minimum and in a New Little Ice Age (Figure 7). This conclusion is completely opposite to the scenarios presented by IPCC (2001, 2007) as illustrated in Figure 3. With “the Sun in the centre”, no other conclusion can be drawn, however.

In the years 1997-2003, I headed an INTAS project on “Geomagnetism and Climate”. It was within this project that we lay the ground for the view on the Solar-Terrestrial interaction (presented at the EGU-AGU-EGS meeting in Nice, 2003), later developed and integrated in the way here presented.

Posted by Rajan Alexander at 8:23 PM