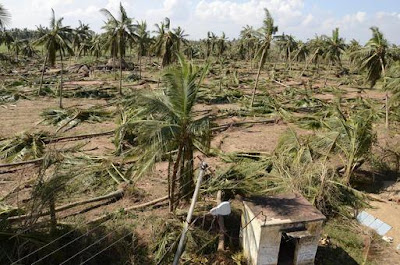 Chennai, Jan 3 : The devastating cyclone Thane has caused extensive damage to standing crops in thousands of hectares in the coastal areas of Tamil Nadu, if the reports submitted by the Agricultural Department officials to the State Government are any indication.

Officials of the Agriculture Department who had conducted field visits in the cyclone-ravaged areas of the worst-affected Cuddalore, Nagapattinam, Thanjavur, Tiruvarur, Villuppuram and Kancheepuram districts, assessed the damage caused to the crops and submitted a preliminary report to the Revenue department.

The Revenue authorities, in turn, forwarded the report to Chief Minister J Jayalalithaa, who held detailed discussions with senior officials of various departments at the State Secretariat today to assess the extent of damages caused by the cyclone. The preliminary report said paddy crops to the tune of 58,000 hectares were damaged in Cuddalore, 53,630 hectares in Nagapattinam, 24,480 hectates in Tiruvarur, 10,630 hectares in Villuppuram, 2,825 hectares in Thanjavur and 1,790 hectares in Kancheepuram.

The Chief Minister, who had earlier reviewed the situation in cyclone-affected areas after it had crossed the coast on December 30, announced an immediate allocation of Rs 150 crore to take up relief and restoration works in the affected areas.

Approximately over three lakh huts and tiled houses in were affected in the cyclone. The condition of farmers is worrisome as no compensation would restore their loss for the next five years, an officer said. To prevent farmers’ suicide or any untoward incidents, State should formulate policy to boost agriculture without any delay, he added. By and large, Thane affected the district much more than the tsunami. But it seems NGOs and media have still not felt the intensity of the destruction caused by the cyclone, he added

Posted by Rajan Alexander at 12:56 PM