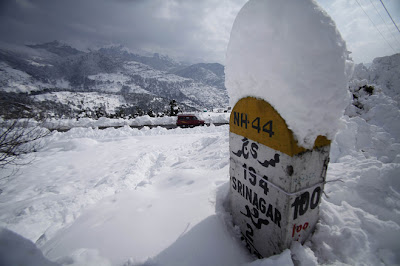 New Delhi: The cold wave has continued in the capital, where the minimum temperature fell to five degrees on Monday night. The MET department has predicted a further dip in temperatures over the next few days. Snowfall in the upper northern region has resulted in a dip in the temperature. The country wide death toll due to extreme cold has reached to 140.

Tourists in Nainitaal enjoyed snowfall as a thick blanket of white covered the city on Monday. Snowfall in the higher reaches of the Himalayas and intermittent rain in Jammu and Kashmir, Himachal Pradesh and Uttarakhand has brought down the mercury in the region.

Electricity was restored in parts of Jammu and Kashmir following repair of power transmission lines at Kishenpur-Wagoora and Pampore. Unprecedented snowfall in the higher reaches of Pir Panjal mountains had resulted in a fault on the Transmission Line, affecting 19 grid stations. Parts of Dehradun also have received snowfall after almost 60 years. Kishan Nagar had snow after heavy rain and hailstorms on Monday night. Rajpur is also blanketed in snow, providing much cheer to tourists.

The Supreme court, recognising the extreme weather conditions, has ordered a shelter to be built outside AIIMS for all the patients and relatives who have nowhere to go. A bench of Justices Dalveer Bhandari and Dipak Misra who have been propagating the cause across states, gave the order.

A bench, which has been coaxing states to set up night shelters across the country to protect homeless from the vagaries of extreme weather, was disturbed by the plight of patients and their relatives, whose long wait for a bed in the overburdened hospital was worsened by the continuing cold wave conditions.


"We do not want this to continue. The government must build a shelter either inside the hospital or in its immediate proximity," the bench said.

The Supreme Court on Friday asked the Delhi government to urgently set up a night shelter either inside or close to AIIMS. The bench asked additional solicitor general Mohan Parasaran to report back to the court on Monday about steps taken in this regard.

Senior advocate Colin Gonsalves drew the bench's attention to the court commissioners' report about closure of 21 permanent night shelters and conversion of 40 tented night shelters into tin sheds in Delhi. The bench wondered why the government converted the tents into tin sheds which would not be able to protect inmates from low temperatures.

"How can you have tin sheds in this weather as night shelters," the bench asked.

The bench did not want to waste time in settling the dispute over the status of night shelters and asked the court commissioners to take DISUB officials for a joint inspection over the next three days. It wanted the joint inspection report to be placed before the court on Monday.

Gonsalves also drew the court's attention to the low occupancy rate in night shelters because of non-advertisement of their location.

"Many urban homeless continue to suffer the cold lying in open as they do not know the location of night shelters," he said.

The court, which had repeatedly warned the authorities against urban homeless dying of cold wave, stressed that adequate publicity about the location of night shelters must be given to facilitate poor people to avail the facilities.

The commissioners had also given a report a to the court on the poor compliance of the court's orders to the states for setting up of adequate number of night shelters leaving nearly three million people to sleep in the open.

Posted by Rajan Alexander at 9:50 AM