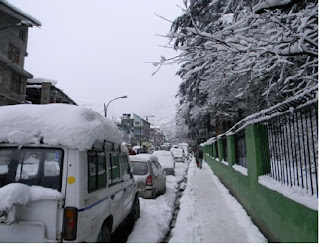 Shimla: The gathering western disturbance lashed much of North India, tightening its grip on the cold wave prevailing in the region as most hill stations today reported a heavy bout of snowfall through the day that intensified as night approached.

While it has been snowing at Jakhoo Hill in Shimla for most of the day, the fall began to accumulate snow at lower elevations as the day progressed, paralyzing normal life for besides some adventurous tourists others preferred to stay by the fireside indoors.

Vehicular traffic that had barely began to limp back to normalcy as the district administration pressed in heavy machinery to open up snow bound roads have come to a grinding halt. The weatherman while sounding an alert for higher hills has issued an advisory of not venturing out as the intensity of the western disturbance was only likely to weaken only by Monday evening.

Shimla, Manali, Dalhousie, Narkanda, Kufri and the tribal regions of Kinnaur, Lahaul-Spiti were being pounded by tons of snowflakes, driving all life indoors. With the snowfall continuing, the met office by afternoon had recorded 11 cm at Shimla, 15 cm at Manali, 21 cm at Kalpa and 20 cm at Keylong.

The days low temperature at Kalpa was minus 3 degree Celsius and at Manali it was minus 1.4 degree Celsius. The lower hills were lashed by heavy to moderate rains through the day as the weatherman forecast more rain over the next 24 hours.