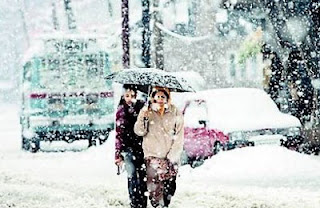 Srinagar: The Indian administered Kashmir, which is already witnessing the harshest winter, lashed by moderate to heavy snowfall on Sunday. The snowfall is going on and it has lead to closure of 296-kms long Srinagar-Jammu highway, only road link connecting Kashmir with rest of the world.

Srinagar, the summer capital of Indian administered Kashmir, has been experiencing moderate to heavy snowfall since last evening. The snowfall was going on. The roads, electricity poles, trees and rooftops of the houses were covered under thick white blanket.

The snowfall has once again brought life to a standstill as authorities had not removed the snow from some areas till the afternoon, thus hampering free movement of vehicles.

The other parts of Kashmir including Gulmarg, Bandipora, Baramulla in North Kashmir and Pahalgam, Islamabad, Kulgam, Pulwama and Shopian in South Kashmir are experiencing snowfall.

He said owing to Western Disturbance, Kashmir will experience moderate to heavy snowfall on January 15 and 16.

“The Western Disturbance will start weakening from Monday evening. Till then, snowfall will continue with intermittent breaks. The higher reaches may receive heavy snowfall,” he said.

After the fresh snowfall, authorities have closed 296-kms long Srinagar-Jammu highway, only road link connecting Kashmir with rest of the world.

“It was heavily snowing on several parts of the highway. In view of the ongoing snowfall, we have closed the highway and not allowed any vehicle to move on the road either from Srinagar or Jammu,” a traffic police official said.

He said once the snowfall stops and weather improves, efforts would be made to clear snow from the road and make it traffic worthy.

The Disaster Management Kashmir has already advised people to defer road travel on Srinagar-Jammu highway, only road link connecting Kashmir with rest of the world, between January 15 and 16 in view of expected snowfall.

Posted by Rajan Alexander at 2:09 PM