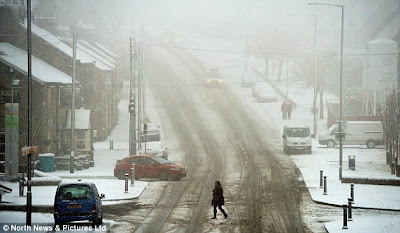 With parts of Britain already covered by snow and ice forecasters have warned of a 24-hour cold snap. Severe weather warnings have been issued for many areas with up to four inches of snow expected to fall on higher ground in Scotland and northern England. One of the first places to be hit was County Durham in the north-east, with residents waking to find heavy snowfall and ice.

With temperatures yesterday hovering only just above freezing for many parts of the country, including London, forecasters warned that ice could create hazardous driving conditions.

Dan Williams, from the Met Office, said it would be a 'short-lived event'. Milder temperatures of about 10C are expected to return but with heavy rain likely in some areas. Britain has basked in unusually balmy temperatures over the last week with the country on course for one of the mildest winters since records began 350 years ago. But forecasters warned that in the coming weeks the unseasonably warm weather may not last, with easterly winds causing snowstorms and freezing temperatures to rip through the country again. Mr Williams said:

'If we continue to get winds coming off the Atlantic from a westerly direction, these will bring mild air over the UK. But if the wind changes to an easterly flow, it has the potential to bring cold air from continental Europe. This is what happened in December 2010, which was very cold because we had an easterly flow for almost a month. When that happens, any precipitation becomes snow and we had lots of snow and freezing weather.'