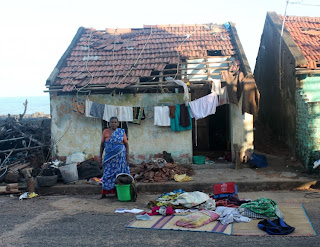 CUDDALORE: Though Thane took only 40 lives compared to the 648 persons who died in tsunami, the destruction caused by the cyclone was far worse than that caused by the 2004 tidal wave.

In 2004, tsunami struck only the coastal areas of Cuddalore district in which 2,500 houses were fully destroyed, 950 cattle were killed, 5,000 small boats and 300 mechanised boats were damaged completely and seawater entered inundating around 1,200 ha of agricultural lands. But Thane affected the livelihood of over two lakh families and about 90,752 hectares of crops. What makes the matter worse is that majority of these were plantation crops and it would take farmers minimum seven years to get a minimum yield after they plant new saplings.

“Our future is gone as the cashew and jackfruit trees that we lost in the cyclone cannot not be brought back within six months or a year. Even if we plant saplings now, it would take minimum seven years to get yield...,” said Dhamodharan of Vegakollai village.

People of coastal villages who lost their properties and lives in the tsunami got help from the State and NGOs. Government and NGOs distributed free boats and constructed houses for the tsunami victims. Such help is yet to come for those affected by Thane.

Posted by Rajan Alexander at 12:31 PM