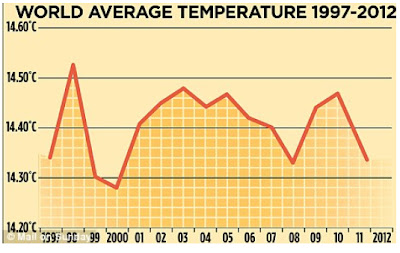 From the time this blog (almost 2 years ago) was launched we were warning it was coming. Here it is. The UK Met Office and University of East Anglia Climatic Research Unit (UEA-CRU) yesterday made two significant admissions that vindicate us - climate sceptics.

a.     Based on readings from more than 30,000 measuring stations, the data was issued last week without fanfare by the UK Met Office and the University of UEA-CRU. It confirmed that the rising trend in world temperatures ended in 1997. See fig above: 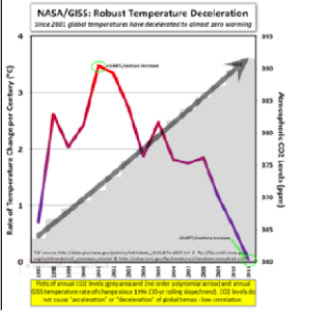 Latest data from NASA / GISS too confirms the robust deceleration of global warming, revealing the non-significant impact on global temperatures by CO2.

“From the 2001 peak of a +3.48°C/century temperature rate, it has now fallen at the end of 2011 to an almost flat rate of +0.04°C/century temperature increase. Per the actual evidence, the increasing atmospheric levels of CO2 (grey arrow and grey area of charts) has zero influence on whether global temperatures are accelerating or decelerating.”

b.     After emitting unusually high levels of energy throughout the 20th Century, the sun is now heading towards a ‘grand minimum’ in its output, threatening cold summers, bitter winters and a shortening of the season available for growing food. Solar output goes through 11-year cycles, with high numbers of sunspots seen at their peak. We are now at what should be the peak of what scientists call ‘Cycle 24’ but sunspot numbers are running at less than half those seen during cycle peaks in the 20th Century. Analysis by experts at NASA and the University of Arizona – derived from magnetic-field measurements 120,000 miles beneath the sun’s surface – suggest that Cycle 25, whose peak is due in 2022, will be a great deal weaker still. Much worse, the sun’s output is likely to progressively decrease until 2100. 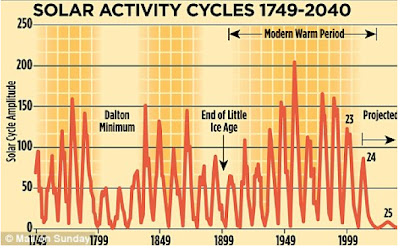 When both the Atlantic and Pacific oceans were cold in the past, such as from 1940 to 1970, the climate cooled. The Pacific cycle ‘flipped’ back from warm to cold mode in 2008 and the Atlantic is also thought likely to flip in the next few years to its negative mode.

For the last two decades, warmist climatologists found it difficult admitting that the sun and oceans – not CO2 – caused much of the global warming between 1970 and 1997. No more as prospects draw near of a mini ice age that could rival the 70-year temperature drop that saw frost fairs held on the Thames in the 17th Century. 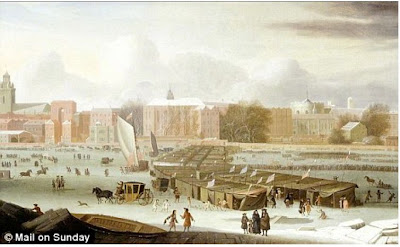 My pal, James Delingpole of the UK Telegraph jocularly headlined his last post as “Children just aren't going to know what sun is”. James of course was taking a dig at Dr. David Viner, UEA-CRU climatologist who prophesized in 2000 “Children just aren't going to know what snow is”.  But this is not a laughing matter and future children living in the mid latitudes may not see much of the sun in any year, if it all it remains in hibernation till 2100.

The gravy train which NGOs like Oxfam, Greenpeace; ChristianAid, ActionAid (and their likes) had hitched on to during the last two decades are coming to an abrupt end. And as they pick themselves up from the crash, they will find that if they survived, only to end up a laughing stock. Their advocacy and programmes were singularly focussed to “adapting” to global warming at a time when the planet was actually fast hurling into a Little Ice Age.  It is the same kind of tragic irony if India were to amass their entire defence forces in the southern coastlines to counter Sri Lanka and Maldives when their real security threats were China and Pakistan on their northern borders! That’s the kind of big hole the bust of the global warming scam punched into the credibility of these NGOs!

There could be several alternatives why these NGOs find themselves in this wretched predicament. The first could be that they had no idea what the whole science of climatology was about. If so, why did they arrogate themselves the right to prescribe national and international policies? And having done so, what does it make them out to be? Scamsters?? The second alternative could be that they had the requisite climatology expertise but they nevertheless choose to misinform and implement dubious programmes as dictated by their funding compulsions. If so, what does it paint them to be? Prostitutes?? And if this agenda, restricting development of developing countries all in the name of curbing "climate change"; what does it paint these NGOs? Eco-imperialists? And being eco-imperialists and still talking on behalf of developing countries, what character do these NGOs demonstrate? Hypocrites? In all these cases, the damage they have inflicted is not merely to themselves but the NGO sector as a whole. And that’s the sad part.

The Columbia Journalism Review provides us an insight to the workings of an INGO:

“Lauren Gelfand, a correspondent for Jane’s Defence Weekly who is based in Nairobi, took a year off from journalism to work for Oxfam. Gelfand says that her Oxfam experience helped her to understand just how much attention NGOs put on getting their story told. All the talking points are carefully worked out….

It’s a huge bureaucracy and there are as many levels of control as in any government... To be fair to the NGOs, Gelfand says, it’s easier to sell a famine than to effect real, common-sense policy change. And, she says, she continues to believe that most aid workers do what they do because they want to make a difference. Nonetheless, alot of what Oxfam does is to sustain Oxfam.”

But these NGOs wield great power – and yet are accountable to no one. And why should this be? The issue of accountability is thorny for NGOs. Unless, an NGO has a very specific and defined mandate with a target population, such as saving tribal livelihoods in the Amazon forest, its client base will be so broad that it’s almost impossible to judge whether it is being responsive to its intended clients. In effect, there are often no specific clients to hold an NGO accountable.

"In both types of organizations - Western NGOs and NGOs elsewhere - there is a lot of waste and corruption, double-dealing, self-interested promotion, and, sometimes inevitably, collusion with unsavory elements of society. Both organizations attract narcissistic opportunists who regards NGOs as venues of upward social mobility and self-enrichment. Many NGOs serve as sinecures, "manpower sinks", or "employment agencies" - they provide work to people who, otherwise, are unemployable. Some NGOs are involved in political networks of patronage, nepotism, and cronyism.

Narcissists are attracted to money, power, and glamour. NGOs provide all three. The officers of many NGOs draw exorbitant salaries (compared to the average salary where the NGO operates) and enjoy a panoply of work-related perks. Some NGOs exert a lot of political influence and hold power over the lives of millions of aid recipients. NGOs and their workers are, therefore, often in the limelight and many NGO activists have become minor celebrities and frequent guests in talk shows and such. Even critics of NGOs are often interviewed by the media (laughing).

Finally, a slim minority of NGO officers and workers are simply corrupt. They collude with venal officials to enrich themselves.”