Two states, Tamilnadu and Pudhucherry, who were most affected by the great Tsunami of 2004, apparently were exposed as not learning any lessons on better disaster preparedness. To discover that they ignored official and precise warnings of a cyclone strike is painful.  Even the blogsphere was fairly active in giving out regular warnings. Blogs like ours, Indian Weatherman, Vagaries of the Weather, just  to name a few who were tracking the impeding Cyclone Thane for over a week before its strike. And to find these two state governments on the wrong foot when Cyclone Thane struck is to suggest incompetence at its height. This is inexcusable. This is unpardonable. This is a blot on good governance. 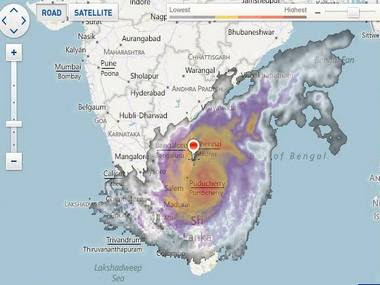 Though the Indian National Centre for Ocean Information Services, Hyderabad, started issuing warnings from December 25 through the Indian Meteorological Department about Cyclone Thane prowling in the Bay of Bengal and the exact time and region where it would strike, the civil administration was found wanting when it came to rescue and relief operations. Power supply and telecommunication facilities are yet to be restored in Cuddalore.

“Even the district collector is depending on the police wireless network to communicate with the outside world,” said a senior official in Cuddalore.

Not a single fisherman ventured out to sea since INCOIS released its first advisory on December 25.

Hundreds of huts and small houses along coastal Cuddalore were blown away by high-speed winds and the residents had to spend the night without a roof over their heads as there were no places to accommodate them.

“Though the government has been claiming that it has built cyclone shelters, we could not locate any shelters when the need came,” said KV Kannan, a farmer in Cuddalore district.

He said supply of drinking water and milk in the district has been paralysed since Saturday. “We should have provisions at least to help the people staying along the coastal areas,” said Kannan.

Cyclone shelters built along the coastal regions in Tamil Nadu are being used as schools and boarding rooms for policemen.

“Tamil Nadu lies close to tsunamigenic regions and hence the disaster management authorities should be trained like the commandoes of the Indian Army. With the kind of advance warnings issued by institutions like INCOIS, the government should have a system in place to evacuate the people to safety and protect infrastructure which are always under the threat of natural calamities,” Prof Menon told DNA.

Prof Menon said the response system should be sensitive to early warning alerts.

Posted by Rajan Alexander at 8:24 PM