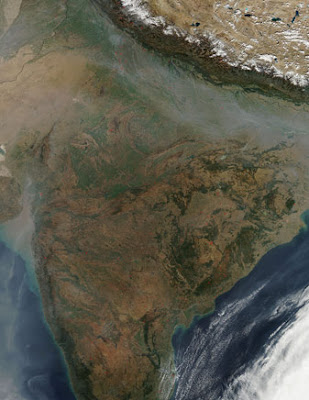 The heaviest haze stretched from west to east across the southern face of the Himalaya Mountains, and another thick layer can be seen east of the border with Pakistan.

Haze and thick streaks of smoke, some of which can be seen to rise from active fires (marked in red), also extend over the Arabian Sea. Compared to the heaviest swaths of smoke and haze, the skies over the rest of India appear relatively clear.

However, a comparison with the clean skies north of the Himalaya, where the topography can be seen in crisp, clear colors, demonstrates just how heavily laden the air is throughout the entire region south of the Himalaya.

The Moderate Resolution Imaging Spectroradiometer (MODIS) aboard the Terra satellite captured this true-color image on December 25, 2011.

At that time, Tropical Cyclone Thane was just forming in the Bay of Bengal, and clouds associated with this system can be seen in the lower right corner of the image. Thane became the strongest tropical cyclone of 2011 within the North Indian Ocean, reaching Very Severe Tropical Cyclone status on December 28. It came ashore the next day, killing at least 47 people and leaving a wide swath of destruction in southeast India.