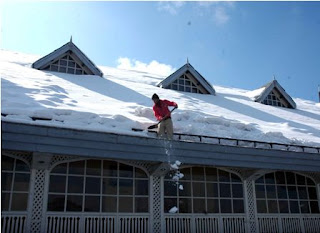 Shimla, Jan 14 (PTI) The weather office today warned of heavy rainfall, snowfall and hail storms in various parts of Himachal Pradesh during the next 48 hours.

"Heavy to very heavy snowfall is likely to occur at isolated places in the higher hills. Heavy rainfall is likely in mid-hills and hailstorms in lower hills during the next 48 hours," Director of MeT office, Manmohan Singh said.

The Western Disturbance as an upper air system with its centre over North Pakistan and East Afghanistan will affect the state from this evening onward, he said. The weather office's prediction comes at a time when the normalcy is yet to be restored fully in the hill state after snowfalls in the first week of January.

Meanwhile, cold wave prevailed in the region inspite of marginal rise in mercury as strong icy winds continued to sweep the region. The sky remained partially overcast and pale sun failed to warm up the region. Keylong in tribal Lahaul and Spiti district was coldest in the region at minus 12.7 deg C followed by Kalpa at minus 6 deg C, Manali minus 4.2 deg C, Solan minus 0.2 deg C, Bhuntar 0.2 deg C, Una 1.2 deg C, Sundernagar 1.6 deg C and Dharamsala and Shimla both recording 3.1 deg C.

The high altitude tribal areas reeled under biting cold wave with the minimum temperatures ranging between minus 17 and minus 28 deg C. Natural sources of water like lakes, springs, rivulets and tributaries of small rivers were frozen in these areas.

Posted by Rajan Alexander at 5:51 PM