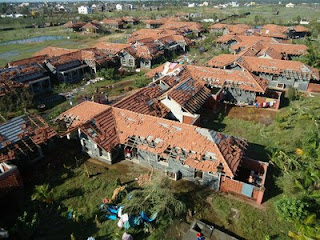 CHENNAI: Chief Minister J Jayalalithaa on Tuesday allocated `850 crore for relief and restoration works and for providing compensation for the loss of standing crops, loss of property of fishermen, damaged huts and houses in Cuddalore district, which was worst-hit by cyclone Thane. Since the CM has already released `150 crore for carrying out repair works on roads, the remaining `700 crore will be released immediately.

Jayalalithaa will be visiting the cyclone-affected Cuddalore district on Wednesday and distribute assistance to the affected people. State ministers will stay back in the district and continue disbursal of assistance.

The CM made these announcements in a statement after a 90-minute meeting at the Secretariat with 14 ministers and secretaries of the departments that are involved in the relief works in Cuddalore district.

At present, six senior IAS officers, 11 Deputy Collectors, 100 tahsildars and deputy tahsildars and 1,000 TNEB personnel are camping in Cuddalore district for relief works and to disburse compensation to the affected people. The CM has assured that drinking water supply will be fully restored and power will be restored in all municipalities and town panchayats by January 5.

For the restoration of electricity facilities alone, she has allocated `300 crore to the TNEB immediately, while the compensation for damaged huts and houses will be distributed by January 5.

In Cuddalore and Villupuram districts, around 3.5 lakh huts and tiled houses have been damaged by the cyclone either partially or fully. For partially damaged huts, `2,500 each will be provided as compensation, while `5,000 each will be given to fully damaged huts. Jayalalithaa has earmarked `114 crore for this purpose. Though the Centre has fixed `2,000 as compensation for houses damaged in disasters, the State government has been providing enhanced assistance.

Eight top officials, including the Rural Development Commissioner, are monitoring the restoration of drinking water supply. The CM has earmarked `50 crore for this purpose. Twenty-seven high-tension electricity towers, 4,500 transformers, 36,000 electricity poles and cables of 350 km length have been damaged. The TNEB has engaged 1,000 personnel from other districts to restore supply.

Paddy crops in 58,000 hectares, cashew in 23,500 hectares, sugarcane in 5,752 hectares and banana trees, pulses, edible oil crops, cotton and jackfruit in 8,947 hectares have been damaged by the cyclone.

Posted by Rajan Alexander at 12:09 AM