Warning against walking on frozen water in Indian-controlled Kashmir 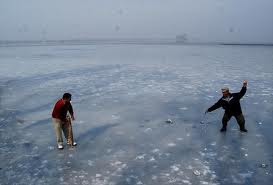 The persistent cold wave in Indian-controlled Kashmir has resulted in freezing water bodies in and outside Srinagar city, the summer capital.

The world famous Dal Lake has partially been frozen, however along fringes the ice formation on water is tough. Dal Lake situated in the heart of Srinagar city is a major tourist attraction. Dozens of houseboats are parked on the placid water of the lake.

"We have issued an advisory to the general public not to attempt walking or skating on frozen water surfaces in the lakes, ponds or rivers," said Irfan Yaseen, vice-chairman of Lakes and Waterways Development authority. "There is apprehension that the thin ice formed on water surface may break and result in drowning."

Yaseen said volunteers of Civil Defence along with policemen on Friday visited various areas including Dal Lake, Harwan Sarband, Narbal, River Jhelum and prevented the children from playing on frozen water bodies, besides counseling the children and their parents about its hazards. The frozen waters make it difficult for hundreds of boatmen to row their shikaras (small boats) in the lake.

"For the past four days, the formation of ice on the fringes of lake is much tougher and people walk on it," said Abdul Ahad, a boatman.

The frozen lake in Srinagar has become an attraction with the residents and tourists, who too feel excited taking a walk on the frozen surfaces.

"For the first time I am witnessing a lake surface froze to a solid mass," said Bhaskar Sinha, a tourist from Indian city of Kolkata, pointing towards a portion of Dal lake.

There have been years in the past when the entire Dal Lake in the Srinagar city froze to a solid mass.

Officials said other water bodies and river edges in the cold areas of region have also frozen in wake of the intense cold spell.

At present the region is in the grip of harshest 40-day period of winter, locally called Chilla Kalan. During this period from Dec. 21 to Jan. 31, the region mostly remains under extreme cold due to below-freezing night temperatures.

The cold wave in and outside Srinagar added to the miseries and hardships to the residents with water freezing in supply lines. The cold wave has brought ice layers on lanes and roads, making it difficult for pedestrians to walk on. The icicles can be seen hanging from rooftops in Srinagar and outskirts.

Reports from rural areas say many villages south of Srinagar are facing acute shortage of water, power and other essentials.

Posted by Rajan Alexander at 6:06 PM