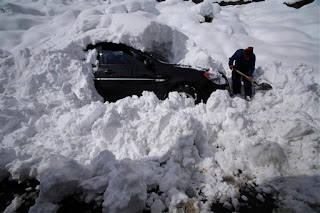 Shimla, Jan 10 (PTI) Himachal Pradesh reeled under a severe cold wave after heavy snowfall and rains over the last four days caused a sharp fall in temperatures across the state. The key tourist resort of Manali shivered with minimum temperature plummeting by six degrees to settle at minus 7 degree Celsius while the state capital Shimla and Solan recorded a low of minus 2.1 degree Celsius and minus 2.5 degree Celsius respectively, which is 4.5 degrees below normal.

Bhuntar and Sundernagar recorded minimum temperatures of minus one degree and zero degrees while Palampur, Una and Dharamsala groaned under piercing cold wave conditions with mercury slipping to one degree, 2.1 degree and 2.4 degree respectively. Keylong and Kalpa in tribal districts of Lahaul and Spiti and Kinnaur recorded a low of minus 10.5 degree and minus 9.3 degree. Vehicular traffic remained suspended in upper Shimla region for the second day today and several tourist resorts including Kufri, Narkanda, Sarahan, Sangla remained inaccessible. The upper Shimla areas and Kinnaur remained cut off from the state capital while vehicular traffic was badly affected in the morning due to slippery road conditions and daily supplies like newspapers, vegetables and milk reached late by over three hours. The winter carnival at Manali also suffered due to snow and intense cold as people preferred to stay indoors and Kullu-Manali road also remained closed due to snow. The region had some respite from rains and snow today after four days but pale sun failed to warm up the region. People in Shimla woke up to a bright morning but thick clouds overcast the sky in the afternoon and day temperature remained low. All natural sources of water like lakes, springs, rivulets and a 70km stretch of Chandrabhaga river were frozen, causing sharp fall in water supply in the Snowfed Sutlej, Ravi and Beas rivers, affecting power generation. Chandigarh: Amritsar in Punjab today recorded this year's lowest minimum so far at minus 2 degrees Celsius as severe cold waves swept most parts of the state and neighbouring Haryana. Amritsar's minimum today dropped five notches below normal and settled at minus 2 degrees Celsius, the MeT Office here said. On December 30 last year, Amritsar had recorded a low of minus 2.1 degree Celsius and on December 27, the minimum had settled at minus 1.6 degree Celsius. 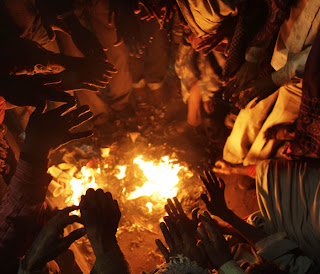 Meanwhile, intense cold conditions also swept Ludhiana, which recorded a low of 3.8 degree Celsius, down two notches, while the minimum at Patiala was 4 degree Celsius, two below normal.

Chandigarh had a clear sky today, but the night temperature dropped since yesterday to settle at 4.6 degree Celsius.

In Haryana, Hisar and Rohtak reeled under bone-chilling weather recording identical minimums of 1.7 degree Celsius each, both down five notches. Cold wave also swept Karnal, where minimum settled at 2.4 degree Celsius, five degrees below normal while Ambala's minimum was 5.2 degree Celsius. Narnaul, too, experienced a cold night at 4 degree Celsius, down four notches.

The MeT has forecast no immediate relief from cold weather conditions in the region during the next two days. 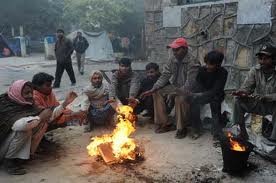 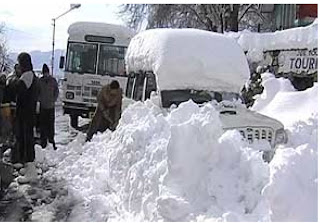 Cold wave back in Rajasthan 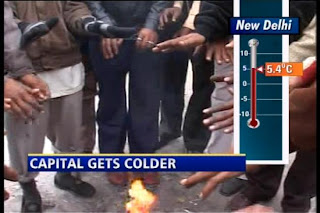 New Delhi, Jan 10 (ANI): There was no respite for residents of Delhi, as the temperature plummeted further on Monday night and is expected to touch even lower levels in the coming days. The biting cold and icy winds have magnified the agony of people living on the streets. As some of them gather around bonfires to warm themselves.

"We get all the garbage and burn it, to protect ourselves from the cold. We are rickshaw pullers, what else can we get? We have no money to get wood. We have no other alternative. Since the last two days, it is even colder after the shower of rain," said Monu Singh, a rickshaw puller.

The city has experienced foggy conditions over last few days, leading to low visibility and several accidents. A recent downpour in the city heightened cold wave conditions, in north India.

"We sit inside the car to feel warm, we cover ourselves with a blanket and sit inside. We wind up the windows to protect ourselves from the strong winds. After the hailstorm, the cold wave has intensified," said Amar Mehta, a resident.

According to the Indian Meteorological Department, minimum temperature in most parts of northern India is likely to remain two to three degrees Celsius below normal, and the mercury will continue to dip. (ANI)

Posted by Rajan Alexander at 5:21 PM