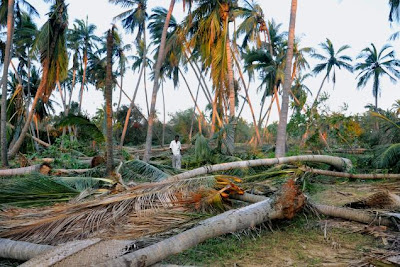 “We have gone back by at least three years,” said a shocked Mr P.R. Bala Krishna Kumar, a third generation entrepreneur in coconut farming. He lost nearly 1,000 coconut trees in his huge farms due to the effects of cyclone Thane, which caused landfall between Puducherry and Cuddalore last week.

“We need to start from zero now. It will take a month to clear the debris, and another six to eight months to plant the trees. By the time we get the coconuts, it will take at least two years,” he said.

With winds of over 140 kmph, the effect of cyclone Thane was a second Tsunami for people living in this coastal district of Tamil Nadu. The agricultural sector bore the brunt of devastation as thousands of huge trees uprooted throughout the town.

Mr Kumar's coir professing unit (SNS Sons) in Sangolikuppam, which is six km south of Cuddalore Old Town, has also been completely damaged. This could cost him at least Rs 1 crore.

“There is no insurance. We need to bear the entire cost,” he said. “Like the fishermen, who do not know any other business other than fishing, we do not know anything other than coconut farming. We do not how we will recover from this devastation,” said Mr Kumar, who is a large coconut wholesale and retailer.

‘During the earlier cyclones, we used to count how many trees were uprooted. However, in Thane's case, we are counting how many trees are left. There are hardly any,” he said.

Mr Kumar said he requires nearly Rs 50,000 to clear the debris in his farm. While the State government may give some subsidy, it may not be enough to clear a portion of the debris. To clear the debris, it will cost around Rs 400 a person, he said.

While it is too early to estimate the cost of the damage, people in the agricultural sector claim the loss could be easily over Rs 2,000 crore in Cuddalore district. This includes the damage to coconut trees, cashew, jackfruits, banana plantations and paddy fields.

At Bavane Masala, a small unit involved in preparing chilly and turmeric powders at the Sidco Industrial Estate in Semmandalam industrial estate in Cuddalore, over 50 kg of chilly power got infected with fungus. Also, pieces of broken window glass got mixed with turmeric power, said its managing director Mr J. Jayasankar.

Mr S. Ashok, President of the Micro and Small Enterprises Association of Cuddalore District, said that it may take about 3 to 5 years for the new plantations to bear fruits.

On account of this coir industry, cashew processing, cashew oil processing and other related industries may face closure.'

His small unit was completely ruined by the cyclone. The asbestos sheet was blown off and fell nearly 10 metres away.

“We have never seen something like this. It was worse than the Tsunami and only the government can bail us out from this terrible situation,” he said.

In the estate, there are 60 units and mostly these are small and tiny units employing 10-30 people. The units are involved in sectors like segregation of plastics, coir products, packaging, welding and spices.

The thatched roof of Mr G. Ramalingam's unit, which manufactures coir products, has come down crashing.

“Thank God, the damage happened in the night, else there would have a large number of casualties in the units,” he said.

Around 10,000 units have been affected with a total loss to the tune of Rs 200 crore. The asbestos/metallic sheets in the industries have been thrown away, said the association. The cyclone has behind a trail of devastation making Cuddalore district look like a battle field.

The disruption to power cable has thrown out of gear and the industries are waiting with crossed fingers about the restoration of power supply. The association in representation to the State government has sought the following:

The units located in above feeders should be exempted from load shedding for next 3 months which will pave way for their rehabilitation.

Suitable remedial package for coir and cashew related industries due to scarcity of raw material expected.

Posted by Rajan Alexander at 1:18 AM