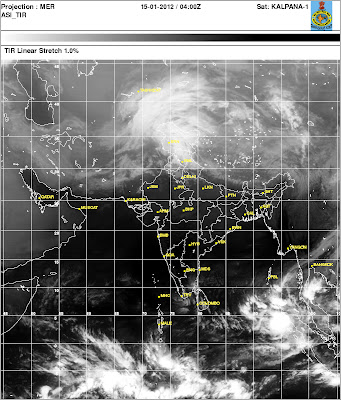 January 16, 2012: The active western disturbance over northwest India has delivered an ace in the form of an induced cyclonic circulation, triggering heavy weather.

This is the second successive western disturbance featuring the ‘playmaker’ cyclonic circulation, signalling the intensity of the parent system.

The tendency for cyclonic circulations to get ‘induced’ is most pronounced when amply endowed western disturbance cross into the northwest India.

The cyclonic circulation in turn mops up incremental moisture from north Arabian Sea and helps accentuate prevailing weather over hills and plains of northwest India.

A weather warning issued by India Meteorological Department (IMD) said that heavy rain or snow would be unleashed over parts of Jammu and Kashmir, Himachal Pradesh and Uttrakhand on Tuesday.

A hailstorm warning is also in place for one or two places in Punjab, Haryana, Delhi, north Rajasthan and west Uttar Pradesh.

The western disturbance is expected to continue to affect the western Himalayan region and adjoining plains of northwest India during next two days.

The induced upper air cyclonic circulation was located to over northwest Rajasthan and neighborhood on Monday.

Both will now move eastwards in tandem bringing wet weather over northeast India in phases.

While doing so, the ‘sinking motion’ of air in the rear of the system would once again trigger a cold snap over northwest and adjoining central India.

Insat cloud imagery on Monday showed convective clouds over rising over parts of Jammu and Kashmir.

A short-term forecast for the next two says said that rain or snow would occur at most places over western Himalayan region on Tuesday and at a few places thereafter.

Rain or thundershowers has also been forecast at a few places over the plains of northwest India.

Minimum temperatures would fall by 3 to 6 deg Celsius over parts of northwest and adjoining central India during next two to three days ahead of the next cold wave.

Posted by Rajan Alexander at 11:08 PM