India's Cold Wave: Homeless in India out in the cold

The cold wave death toll in northern India is rising. Sleeping under the open skies and being exposed to the vagaries of weather, many are victims of not just the cold, but disease and age compounded by lack of food and shelter. Suryatapa Bhattacharya, Foreign Correspondent, reports 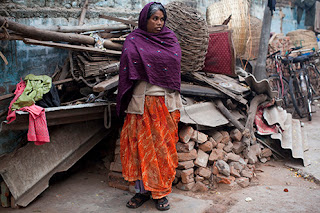 NEW DELHI // Urmila Maurya spends her days on the pavement stringing flowers into garlands for devotees at the nearby Hindu temple.

At night, she lays down on the same blanket she uses for the flowers. When it gets really cold, she uses a plastic tarpaulin to cover herself, but said the police sometimes come and tear it up to discourage her from squatting in the open in New Delhi's Institutional Area, an upmarket locality of the city.

"This is the poor's burden," said Mrs Maurya, a 38-year-old widow. "To live and die on the streets on cold nights."

Every winter, hundreds die in northern India. This is even though India has one of the highest economic growth rates in the world and, by some accounts, the world's most expensive home - Mumbai's US$1-2 billion (Dh4.4bn) "Antilla", owned by Mukesh Ambani, one of the richest men in the world and head of Reliance Industries.

They die not from the cold - temperatures barely hit zero in the big cities in the north. They die because of age, disease and lack of food. India might be booming, but its governments still struggle to look after those at the bottom of the ladder.

Every night in Delhi, an average of 15 homeless people die on the streets, says to Harsh Mander, special commissioner of India's Supreme Court for human rights and social justice. That figure is climbing.

Officially, more than 150 people died in December on the streets in Delhi and neighbouring Uttar Pradesh, Punjab, Bihar and Haryana.

But Mr Mander's figure, which was drawn from a study by the Centre for Equity Studies, where Mr Mander is honorary chairman, is thought to be low.

In past years, authorities in the northern states have handed out blankets and lit public bonfires. Delhi homeless population is the highest in North India. This is largely due to the large-scale migration from neighbouring states for work.

Most are illiterate day-wage labourers who lack proper identification, which would give them access to affordable food and housing programs, which are available to those who earn less than 32 rupees a day.

So, they end up on the streets. Delhi's homeless problem was worsened by the 2010 Commonwealth Games. To beautify the city for the event, the New Delhi authorities drove tens of thousands of pavement dwellers away from the roadsides by tearing down their makeshift huts.

Mrs Maurya was among those whose homes were torn down. She sits beside a pile of broken bamboo and bricks piled high in a corner, on the piece of pavement she now calls home. In August last year, three months before the Commonwealth Games kicked off in Delhi, the police came around and broke down her shack. She is too afraid to rebuild because whatever she puts up may be torn down again.

Mrs Maurya has lived in the same spot on the pavement for more than 20 years after she was brought there as a bride from her village in the state of Uttar Pradesh, one of India's poorest.Mrs Maurya's slab of pavement does not count for residency, and she lacks to the money to pay the bribe to obtain a government identification card. She can't even afford to pay bus fare to go back to her village. She earns 30 Indian rupees (Dh2) a day stringing flowers into garlands. She, quite literally, has nowhere else to go.

"It has been difficult," she says. "But you make do because there is nowhere else to go."

Her friend, Kalyani Devi, 50, also a widow, is homeless as well.

"We are not beggars. We earn a living, but it's just that it is not enough to sustain us." says Mrs Devi.