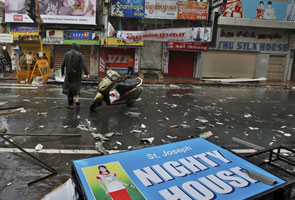 NEW DELHI (AlertNet) - Tens of thousands of villagers in India's southeast need emergency aid after a cyclone hammered the coast last week, causing widespread damage which some aid workers fear could be worse than the devastation wrought by the 2004 tsunami.

Although Thane killed far fewer people than the Indian Ocean tsunami which hit the same coastline, some aid agencies fear the damage to property and infrastructure could be worse as there was more destruction inland. However, they stressed they had not accessed all areas yet and did not have a full picture.

"We've started assessing what the needs are in the aftermath of this severe cyclone," said Amar Jyoti Nayak, regional manager for ActionAid India in Tamil Nadu.

"People need dry food rations, clothes, clean water as basic relief ... many also need support to rebuild their homes which have been completely destroyed by Thane," Nayak told AlertNet by phone from Chennai.

Thane moved in from the Bay of Bengal making landfall around dawn on December 30, primarily lashing the coastal district of Cuddalore, and the former French colonial town of Pondicherry.

Gale winds brought down telephone and power lines and uprooted trees and benches along Pondicherry's tree-lined boulevards and promenade, while tidal waves smashed into low-lying mud-and-thatch villages along the coast.

Most deaths were caused by wall collapses, while others were due to drowning or electrocution, said government officials.

India's eastern coast is prone to natural disasters such as floods, tsunamis and cyclones. The Indian Ocean tsunami left almost 16,300 people dead or missing in India - most of them from Tamil Nadu. Aid workers said unlike the tsunami, Thane had struck interior areas as well as the coastline.

"There is a definitely a lot of damage," said John Roche, head of the International Federation of Red Cross and Red Crescent Societies IFRC in India.

"It's still too early to say how bad it is, but definitely there will be an urgent need to help people who have lost homes and livelihoods recover."

Many areas, particularly in Cuddalore, have not had any electricity for five days, schools and community centres have been battered and drinking water supplies disrupted.

At least 200,000 thatched homes have been damaged by the high winds and 70 percent of trees have been uprooted, blocking roads and preventing authorities and aid workers from reaching some areas.

In one village, almost 6 km (3.7 miles) from the coast, over 50 homes have been wiped out. Hundreds of fishing boats have also been washed away or battered by the storm.

Posted by Rajan Alexander at 10:38 PM