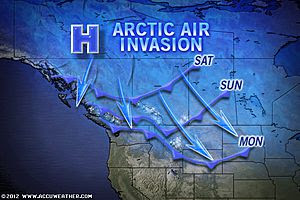 Another blast of arctic air will plunge into the northern Rockies and Plains late this weekend and early next week. The latest shot of cold air will replace the unseasonably mild temperatures that will surge into the region today and early on Sunday.

Temperatures across the Plains have fluctuated like a roller-coaster so far this season, with periods of unseasonable warmth followed by brief shots of very cold air. However, compared to normal, the air descending from Canada that replaces the unseasonably mild air isn't really all that cold. 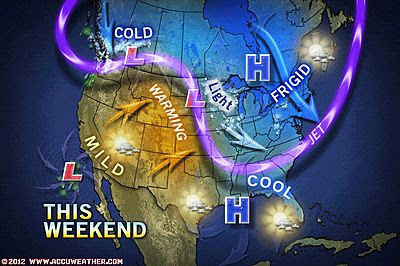 The push of arctic air scheduled to arrive on Sunday and Monday will bring a period of much below-normal temperatures. After a forecast high of 47 today in Great Falls, the forecast high on Monday is 21, and the expected high on Tuesday is a frigid 2 degrees above zero.


Residents are in for a rude awakening as most have been enjoying the stretches of unseasonable warmth. Old Man Winter will be sure to remind residents that the calendar currently reads January and not March or April. As the cold air pushes south and east behind a cold front, an area of low pressure could form along the front and bring a period of accumulating snow from the central Plains to the central Great Lakes, including Chicago.

Posted by Rajan Alexander at 7:46 PM