For all the avid meteorologists out there, we all know the models have been horrible this winter. The thing we don't know is why. I believe I have an answer for you.

A common piece of knowledge is that change takes time to process. The same goes for computer models. What they may be indicating is an upcoming pattern change, and are thus having a difficult time forecasting. Or it could just be a bad model winter. But i'm having a gut feeling that the latter option is more unlikely.

So what does the rest of winter hold in store? Well, let's take a look overseas first. 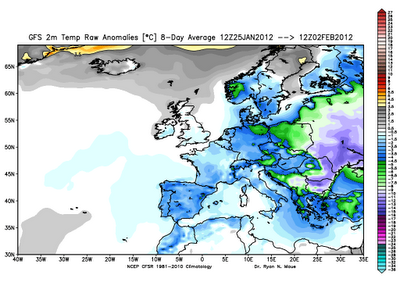 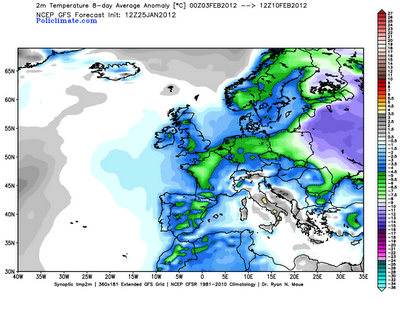 What I have found over the years is that weather in Europe is similarly reciprocated in the US a short time after. Looking at the 16 day forecast temperature anomalies produced by the GFS, the model is forecasting Europe to go into a freeze of sorts, with widespread anomalies of -5 degrees or more.

So what do temperatures in Europe have to do with our weather? As explained above, Europe weather can be reciprocated into our weather. If that holds true, I believe our pattern change is a short time away, which would also spell the model's inconsistency problems out. 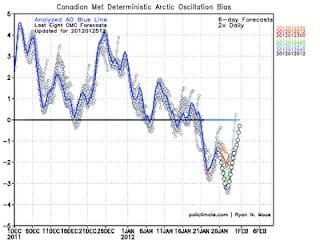 I am using the CMC as a forecast because, as you see, it has much less flawed runs against verification than other models do. That is, there are less gray lines (past forecasts) leading far away from the verification, thus increasing my confidence in the forecast. Recently, the Arctic Oscillation has been negative- a sign of the changing atmosphere. The stratosphere and associated polar vortex have taken big hits recently and are staggering around, barely able to be held up on their own. If we can get one more good SSW (sudden stratospheric warming), I believe this cold will be forced to come south very quickly as the polar vortex breaks. The negative AO also supports cold air in the US, which could be the reciprocation of the cold Europe land mass 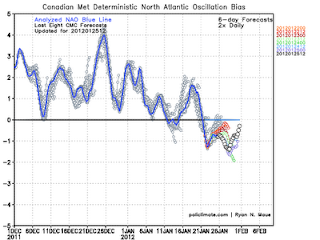 I am using the CMC for the same reasons i used the CMC for the AO, and those reasons are mentioned above. The CMC tells that the NAO is negative and should continue to be that way for a while. I find that the NAO and AO are very closely related, and thus it is possible for both to go negative simultaneously. That appears to have happened in this scenario. These AO and NAO are only short range forecasts, and while they appear to not contribute to the rest of winter forecast, they do. We have seen less strong positive days and more negative days of the AO and NAO this month than last- a sign that the pattern regime holding in the warmth and holding out the cold is weakening.

I'm still thinking a change to more snow and cold is in the cards. I find it way too early to throw in the towel on this winter, especially with these latest AO, NAO, Temp. Anomaly forecasts and data presented here today. I think it is still possible a good Nor'easter will come around. When it does, it could be "major". As for the storm track, the jet stream should shift at least slightly south, bringing Chicago, Des Moines, Detroit into possible target zones for snowstorms.

Posted by Rajan Alexander at 3:29 PM