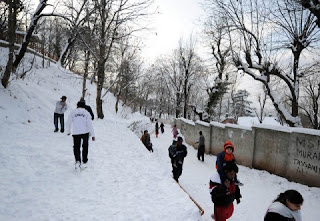 ISLAMABAD - The westerly waves affecting central and upper parts of the country caused intermittent heavy rains in the federal capital on Sunday with snowfall on the hills in Upper Punjab, making weather freezing cold, while Met Office forecasted more rain in twin cities in 24-36 hours.

According to a Pakistan Meteorological Department (PMD) official, the weather system is likely to persist for two to three days and will cause scattered rains with snowfall on the hills in Islamabad, Rawalpindi, Gujranwala, Lahore, Sargodha, Faisalabad, Multan, D.G.Khan divisions.

The official said Rawalpindi received 21 millimeters of rain, Kotli 19, Rawlakot 17, Islamabad 16, Pattan Malamjabba and Murree 15, Parachinar 14, Muzaffarabad and Sialkot 13, Dir, Kalam, Risalpur and Chirat 12, Quetta, Pattan and Peshawar received 10 millimeters of rain while Kalam and Murree received 6 inches snowfall. The twin cities of Islamabad and Rawalpindi are in the grip of cold wave due to the current rain spell that started on Saturday. The rain further dropped the mercury in the federal capital as the temperature on Sunday surpassed the freezing point and was recorded at -2 degree Celsius.

The rain washed the roads and streets gave a new look to the city. However, the rainwater accumulated on 7th and 9th avenues, H-9 Service Road, IJ Principal Road and roads in I-9 and I-10 sectors. The rainwater on roads created problems for motorists and pedestrians. The rain created traffic problems the city due to poor visibility as long queues of vehicles were witnessed on the busy roads. The security personnel at almost all the check posts were seen sitting around bonfire to ward off cold while majority of them were holding umbrellas and wearing rain coats.

The commuters in the city faced trouble as there were only a few cabs on the road. Traffic was also very thin while a few shoppers ventured to visit most of the malls, shopping centres and markets.

At the weekly Sunday bazaars held at H-9, G-6 and G-10 under the Capital Development Authority (CDA) witnessed low attendance of shoppers because of the rain and freezing cold.

However, the heavy rain helped the people get rid of various diseases including flue, cough, bad throat, chest infection and skin related problems.

Polyclinic Hospital’s Dr Sharif Astori told Pakistan Today that the recent rainfall would decrease the air pollution due to which the people were suffering from cough and other diseases of lungs.

They instructed that the children should not be allowed to go outside the house and play with water during winter.

He said about 100 patients used to visit hospitals daily, before the rain, in the twin cities but the number of patients suffering from dust allergy, skin problems, and flu, throat, and chest infections was considerably reduced after the rainfall. “Of these, three in every five suffer from seasonal infections - upper respiratory tract infection, pneumonia or bronchitis,” he said. PMD forecasted scattered rain with snowfall over the hills is also expected in Kashmir, Gilgit-Baltistan and adjoining areas during next 24 hours.

“Under the influence of the prevailing weather system, southern Punjab received first rain of the winter season after prolonged dry weather conditions,”

the weatherman informed. However, the official said cold winds have entered northern Balochistan, which are likely to cause scattered rain and snowfall over hill during next 24 hours. The lowest minimum temperature was -13 C recorded in Skardu and -11 in Parachinar. Minimum temperatures in other cities were Islamabad -1 C, Lahore 2 C, Quetta -4 C, Karachi 11 C, Peshawar 1 C, Muzaffarabad 1 C, Gilgit -3 C, Murree -3 C, Multan 4 C and Faisalabad 3 C.