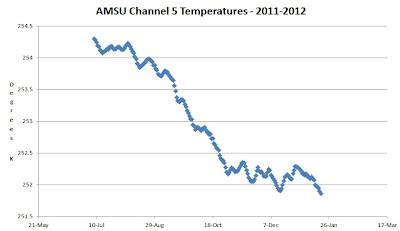 Wondering why Mysore registered the coldest minimum temperature in 120 years recently? Steven Goddard who administers the bog Real Science give us a clue: "Global temperatures are plummeting, and the temperature recorded by AMSU satellite of 251.858K on January 19 was the coldest of any day since at least 2002.”

It’s all happening. The Arctic Oscillation (AO) has finally flipped to its strongly negative mode and if it stays that way, a deep freeze is on its way that would plunge global temperatures to lows, last seen during the 1945-77 global cooling cycle the very least. A foretaste of winter to come during February is already indicated by some of these very recent events:

Snow fell Tuesday in the province of Bechar in the Sahara Desert in western Algeria. A 24-hour cold spell brought snow and rain to the region. Strong wind blew the snow across roads and buildings in the province of Bechar. The weatherman at the National Centre of Meteorology and Seismology (NCMS) recorded sub-zero temperatures at Jebel Jais area of Ras Al Khaimah and forecast that these conditions are set to continue for the rest of the week. People who live in the region said the snow was good for the palm trees because it killed parasites. Bechar is located in the northern Sahara, about 36 miles south of the Moroccan border. Click arrow to watch video. 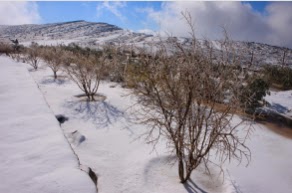 According to the National Centre of Meteorology and Seismology (NCMS) forecast for today, minimum temperatures are set to dip to 0°C in the UAE’s mountainous regions while internal areas could see temperatures dipping to a nippy 5°C and coastal areas could see minimum temperatures of 13°C. The NCMS forecast reads: “Cold weather during day times to very cold during night. The cloud amount will increase at times, especially over the northern areas, with chance of light rain. Winds will be west to northwesterly, moderate to fresh in general. Sea will be moderate to rough with wave height 3 - 5 / 6 ft offshore.”

Unaccustomed to the chill, UAE residents are putting up a brave front as a cold wave continues to spread across the length and breadth of the country, with extreme weather conditions sweeping mountainous regions and the country recording its lowest temperatures for the year yesterday. Rough weather has prompted a warning to beachgoers across the UAE to refrain from venturing into the sea. The UAE’s met department has predicted that the rough weather will continue until Friday 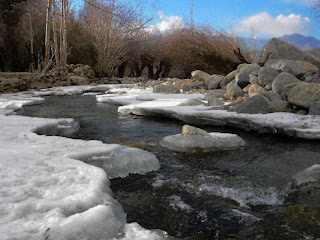 An Igloo Village in Davos 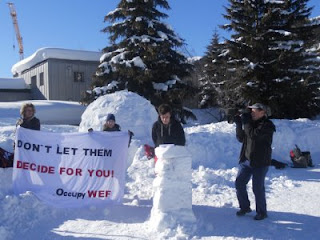 The Occupy protests that blossomed across the globe in the fall of 2011 are popping up at the annual meeting of the rich and powerful in Davos Switzerland. Using the weather to their advantage, protesters are carving out blocks of snow and shaping them into igloos that are surprisingly warm, if not an effort to make. They hope to make develop an "igloo village" near the Davos train station.

The first half of winter has clearly been much milder than the last couple of winters, as a very strong polar vortex has controlled the pattern, and shielded Europe from any sustained cold. Recently, the vortex has weakened and the AO turned strongly negative as seen above, which would allow seasonably cold weather across much of Europe in February if not earlier. 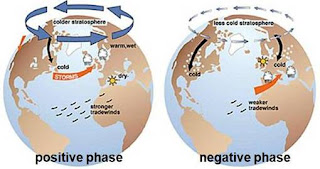 According to NOAA as seen in the above diagrams the AO index describes the relative intensity of a semi-permanent low-pressure centre over the North Pole. A band of upper-level winds circulates around this centre, forming a vortex. When the AO index is positive and the vortex intense, the winds tighten like a noose around the North Pole, locking cold air in place.

A negative AO and weak vortex … allow intrusions of cold air to plunge southward into North America, Europe, and Asia. … the index has been mostly positive in wintertime since the late 1980s. The Arctic Oscillation has strengthened in recent decades, contributing to the unusual warmth over the Northern Hemisphere land masses.

The first sign of a much weakened polar vortex is that the Arctic Oscillation (AO), also referred to as the Northern Annular Mode (NAM) has recently switched to a strongly negative mode - the first time in four months.Britain blasted by snow & ice yesterday is example of this. Read here.

The AO is an atmospheric circulation pattern in which the atmospheric pressure over the Polar Regions varies in opposition with that over middle latitudes (about 45 degrees North) on time scales ranging from weeks to decades. The oscillation extends through the depth of the troposphere. During the months of January through March it extends upward into the stratosphere where it modulates in the strength of the westerly vortex that encircles the Arctic polar cap region. 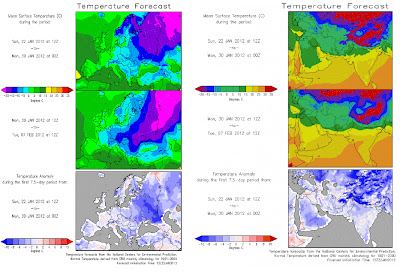 The NOAA's AO prediction for the next two weeks shows a strong negative trend which typically in the past has brought colder weather for Europe. The bottom chart for Europe shows the anomaly for the coming week. The middle chart shows the foret.cast for the week after. It’s going to get even colder. Europe this year may get a hard winter after all – it may be just arriving late. The lower chart of central Asia shows below normal temps are forecast for almost every region for the coming week, and the middle chart shows even deeper cold for the week after, as we saw is the case for Europe. In fact it’s rare to see that much cold over such a vast continent

However, AO's cousin the North Atlantic Oscillation (NAO) sill remains weakly positive (graph to right) but ensemble mean (graph to the left) suggests models are indecisive which mode NAO will go by February. But since the polar vortex is rapidly giving way, the odds favour the NAO too slipping into strongly negative mode sometime in February or even earlier.

Atlantic over the past 50 years,. h Other studies have found correlations between NAO and Indian monsoon.  “Interannual and long-term variability in the North Atlantic Oscillation and Indian summer monsoon rainfall” (Dugam, Kakade and Verma, Indian Institue of Tropical Meteorology, 1997 [http://cat.inist.fr/?aModele=afficheN&cpsidt=2068184]) investigated 108 years of NAO / monsoon data and found that:


“The decadal scale analysis reveals that the NAO during winter (December-January-February) and spring (March-April-May) has a statistically significant inverse relationship with the summer monsoon rainfall of Northwest India, Peninsular India and the whole of India. The highest correlation is observed with the winter NAO. The NAO and Northwest India rainfall relationship is stronger than that for the Peninsular and whole of India rainfall on climatological and sub-climatological scales.”

When the polar vortex weakens, the polar jet stream slows and meanders in a form that allows the extension of low pressure lobes much farther to the south. These can become stationary for days and block the normal circulation of the atmosphere. The negative AO/NAO is associated with a slowed polar vortex and polar jet stream. When the jet stream slows, it meanders in a waveform pattern (Rossby waves). The general effect is illustrated below:

Blocking has a lot to do with the severity of winter weather in the Northern Hemisphere, and the AO has a strong ability to control blocking. A blocking event can be defined as a week or more of excess pressure in the mid-troposphere together with an anticyclone at the surface. … blocking occurs preferentially during the low AO phase in Alaska, the North Atlantic, and Russia. [http://www.jisao.washington.edu/wallace/ncar_notes/] Barriopedro et al (“Solar modulation of Northern Hemisphere winter blocking”, Journal of Geophysical Research, Vol.113, 2008 [http://idl.ul.pt/davidbarriopedro/2008%20Barriopedro%20et%20al.pdf]) found that: