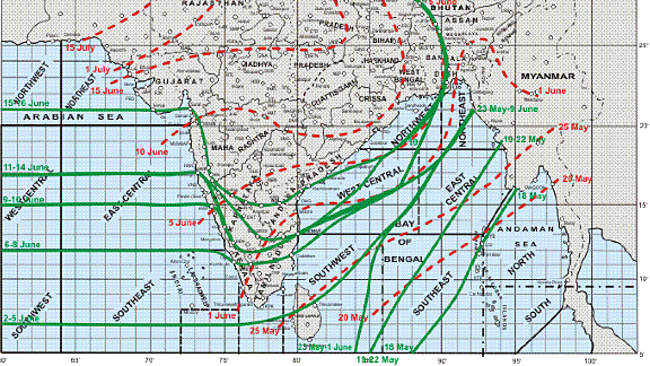 (Eric Leister, Accuweather) Through the middle of June, the advance of the southwest monsoon across India has been one to two weeks behind schedule.

While the monsoon has recently surged northward along the west coast, rainfall amounts have averaged below normal despite the arriving rain.

Even in areas where the monsoon rains have arrived, near- to below-normal rainfall is expected over the next seven days. The monsoon will likely push farther inland across India, reaching more of Andhra Pradesh while expanding into coastal Orissa and West Bengal. The monsoon will also attempt to advance into eastern Jharkhand and Bihar before week's end.

Long-range forecasts expect the monsoon to remain delayed in reaching northern India and Pakistan by one to two weeks. Also, rain is expected to be below normal in these areas for the entire season leading to an increased risk for widespread drought.

Posted by Rajan Alexander at 12:08 AM