Monsoon may have set in over Kerala, bar formal announcement by IMD. Concerns remain 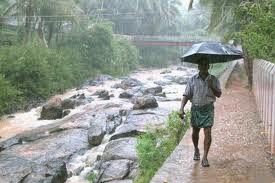 Slightly weaker westerly winds are blowing straight into Kerala. The monsoon may have set in after all, bar the shouting. A formal declaration from the Met Department is expected anytime from now.

Thiruvananthapuram, the monsoon gateway woke up to a slight but steady drizzle, though it has given way to clearer skies by 8.30 am.A couple of thunderstorms during the course day – this is the forecast for the city. India Met Department sees isolated heavy rain over parts of the State.

The obstructing land-based trough extending into South India seems has been made to retreat to the east and get weakened in the process.  Remainder winds of this land-based trough are curling in along with the monsoon westerlies to form a cyclonic circulation over coastal and interior Tamil Nadu.

This circulation could bring in some rain over Tamil Nadu as the monsoon sets in full force. All eyes are now on the Arabian Sea where a cyclonic circulation is forecast to build and gain in strength over the next few days.

Posted by Rajan Alexander at 8:59 AM