The writing is on the wall. India faces drought, degree of severity remaining the only question 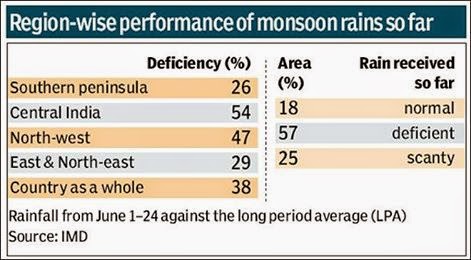 Only 18% of the country the IMD tells us received normal rainfall. But they also inform us that rainfall deficiency till yesterday stood at 38%. A researcher’s eye will at once prop up as it appears somewhere these numbers do not add up....

Leave as it is, we can expect June to end up with a deficiency of around 45% with an adverse Madden Julian Oscillation (MJO) till end of the month.

Yet, June accounts for only 18% of the rainfall during the South West Monsoon (SWM) while July-August together accounts for a whopping 62%. The IMD’s revised forecast earlier this month predicted a 7% rainfall deficiency for the season and accordingly they are betting that July-August could see favourable rainfall that avoids a drought situation in the country.

Even so, for the IMD to realize their revised forecast, we need just more than normal or below average rainfall during July-August. Wein fact  need excess rains during these two months. And if September witness a late withdrawal of the monsoon combined with near normal rainfall, the IMD hopes to save their face.

So is a revival possible as IMD is hoping for? From the last decadal data, it looks highly unlikely the IMD’s prayers will be answered. The probability is that we should end up in a range between minus 15-20% deficiency or in fact more. This blog in our early May monsoon forecast predicted minus 16% Read here. This year looks unusually bleak since 4 major climatic factors have converged to have a negative influence on rainfall:

The IMD needs a miracle to save their face. But the good thing of weather and climate is that miracles happen frequently. Remember 2012 when everyone had written off the monsoon has failed, the IOD turned strongly positive; the El Nino dissipating suddenly (first time in recorded history)  resulting inAug-September recorded a splendid turnaround. We need something of a miracle of 2012 this year if India is to avoid one of the worst droughts in our history!

Posted by Rajan Alexander at 10:58 AM