Read our Monsoon Forecast: Monsoon 2014: Good news is that a ‘Super’ El Niño is unlikely. Bad news is that rainfall deficiency can cross a whopping 16%! 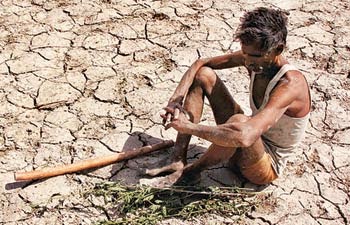 (LiveMint) The monsoon is expected to arrive in Kerala in the next day or two, marking the beginning of the rainy season in India, according to the India Meteorological Department (IMD).

Experts fear that the advance of the monsoon to the rest of the country is likely to be staggered during June.

In May, IMD had forecast that monsoon onset would take place over Kerala on 5 June with a margin of error of four days as opposed to the normal onset date of 1 June.

“Till now, conditions are favourable for the onset of southwest monsoon over Kerala in the next 24 hours, so it could arrive tomorrow,” said Medha Kholle, deputy director general of meteorology (weather prediction), IMD, Pune.​ “Atmosphere is a dynamic entity, we would be able to give a short-range forecast regarding the further advance of monsoon after onset takes place,” she said.

The IMD bulletin had said that the onset of southwest monsoon over Kerala and its further advance into some more parts of south Arabian Sea, remaining parts of Maldives-Comorin area, parts of Tamil Nadu and parts of Bay of Bengal could take place in the next 24 hours.

The late arrival of monsoon comes with more bad news as the Indian Institute of Tropical Meteorology forecast a slackened progression of the monsoon till 18 June, and that the monsoon would reach central India in the form of a feeble current by 20 June. The IITM bulletin said that overall the monsoon in India would be confined to the west coast, northeastern India and the southern peninsula in June. The IITM experts explain that anti-cyclonic circulation over central India will hamper monsoon rains in the mainland.

The criteria set by IMD to declare onset of monsoon over Kerala include at least 2.5mm rainfall in 60% of the 14 stations listed for two consecutive days, along with IMD conditions for wind field and outgoing Long Wave Radiation.

The southwest monsoon, which accounts for 70% of India’s annual rainfall, is the main source of irrigation for 235 million farmers, according to Bloomberg. Late arrival of monsoon, accompanied by further delay in advance of monsoon in the rest of the country could adversely impact sowing of crops and food production, and push food inflation.