Here is one report stating the monsoon remains weak. But there are others that hope a glimmer of hope indicating that winds have picked up speed in Thiruvananthapuram, gusting to more than 30 km/hr this afternoon in signs that the monsoon flows are strengthening. 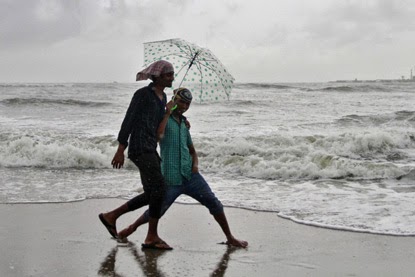 Monsoon reached Kerala coast a few days later than usual on Friday, offering relief to farmers eagerly waiting for the start of the wet season.

(FinancialExpress) A day after it hit the Kerala coast, southwest monsoon remained weak today though parts of the state received rains and isolated heavy rainfall has been predicted till June 10.

According to a bulletin issued by the meteorological centre here, the monsoon was weak over the state.

"Southwest monsoon is weak over Kerala. Rain occurred at many places in the state. Mainly dry weather prevailed over Lakshadweep," the bulletin said.

Heavy rainfall has been predicted in isolated places in Kerala and Lakshadweep till June 10.

In the wake of the onset phase of the monsoon, squally weather with wind speed reaching 55-60 kmph is likely along Kerala coast and over Lakshadweep area during next 24 hours, it added.

Posted by Rajan Alexander at 6:32 PM