The Met told reporters till yesterday rainfall deficiency was above 44% and today this figure went a tad higher as the storm developing in the Arabian Sea ensured the West course remained bone dry....The storm has additionally slowed down and may not dissipate till weekend. The government by downplaying the rainfall deficiency is just playing for time and by July first week when the deficiency figures are announced it is going to cause turmoil in our financial markets. 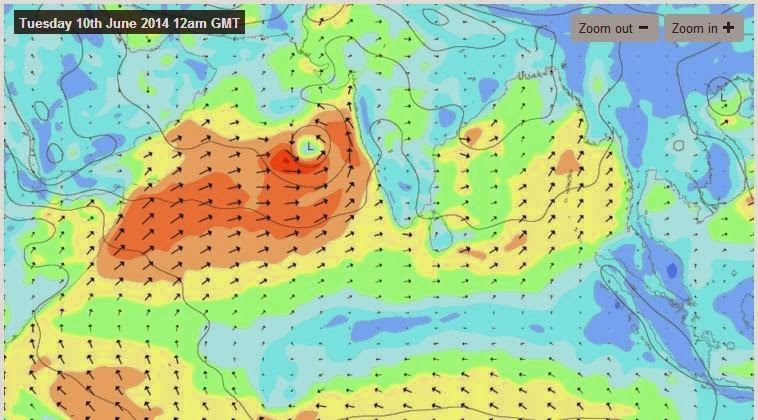 (Vinson Kurian, TheHinduBusinessLine) Arabian Sea storm 02A is well on its course away from India's west coast and moving in a west-northwest direction.

The storm has lately slowed down and will intensify to peak intensity over the next three days only. The landfall date is now expected to be delayed until June 15 with the intensity expected to come down on approach.

Meanwhile, monsoon activity is muted along the west coast with the storm having yanked away most of the moisture accumulated by the west-to-southwesterly flows.

In Kerala, only Kochi was reporting light rain, with haze looming large over both Thiruvananthapuram and Kozhikode. Further north in coastal Karnataka, Mangalore is partly cloudy while Ratnagiri is witnessing light rain.It is hazy in Goa too, but winds are south-southwesterly here originating as they do from the storm located hundreds of kilometres out into the Arabian Sea. Scattered clouds floated over Mumbai, but the storm in the sea in the west-southwest is sending down wind gusts clocking up to 32 km/hr.

Posted by Rajan Alexander at 4:27 PM