The monsoon looks half dead on arrival and Indian meteorologists are now pinning their only hope on the circulation system now developing over Lakshadweep Islands to pull off a short term miracle!! If it the Arabian sea plays ball than it may give rise to some temporary optimism. If not, the disappointment may trigger greater gloom and panic on this year's monsoon prospects. 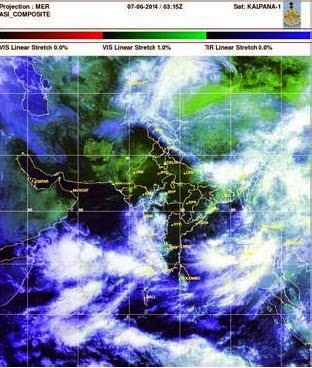 (Vinson Kurian, TheHinduBusinessLine) Kerala has woken up to a typical monsoon nip in the air the morning after.  A full day after the monsoon set in, a spell of showers has been initiated here at 8.30 am, following one in the small hours that was accompanied by high winds.

Winds are now west-northwesterly only because of the ‘pull’ to the north of what are originally monsoon westerlies. This ‘pull’ is forced on them off the Lakshadweep Islands ahead of the formation of what looks like a cyclonic circulation. Various weather models, including India Met Department, expect this circulation to grow into a monsoon depression/cyclone.

India Met Department’s early projections tend to take the system some distance off Porbandar in Gujarat by June 12/13. A series of predictions by US-based agencies has suggested that it may turn west-northwest and head towards Gulf of Oman. They had initially projected the Somali coast in Africa as the likely landfall point. But the European Centre for Medium-Range Weather Forecasts in its 10-day outlook did not see any major system materialising in the Arabian Sea.

In any case, it joins the rest of the agencies in the surmise that monsoon flows across the Arabian Sea will peak in strength over the next week. They may even cause the Bay of Bengal to play ball and help it conjure up a circulation there as well. This system may head into Myanmar, but not before directing some helpful southeasterly monsoon winds from the Bay into east India.

Posted by Rajan Alexander at 10:56 AM