Sluggish Monsoon: Can the Arabian Sea throw a lifeline?

Most international models do not paint a bright picture of monsoon prospects, expecting seas on both sides of the Indian peninsula to be relatively calm.  Within the country however fingers are being crossed that the Arabian Sea could come to the rescue by stirring up systems that give a fillip to the monsoon. In the immediate horizon is the system developing near Lakshadweep Islands that is being eyed as most potential. The blog Indian Weatherman observes:

"Low pressure likely to form off the Kerala coast on 7th June. It can intensify first to a well marked low and then depression. As a depression, it can be positioned due West off Goa by the 9th/10th of June. There is a trough in the 700 hpa level along the 19N line. System could get embedded in the trough. If so, then

a) it can strengthen and move due West.
b) If the rough gets weak by the 9th/10th, then the system will also weaken and move NW and dissipate.

Some models show a) and some b) as a possibility." 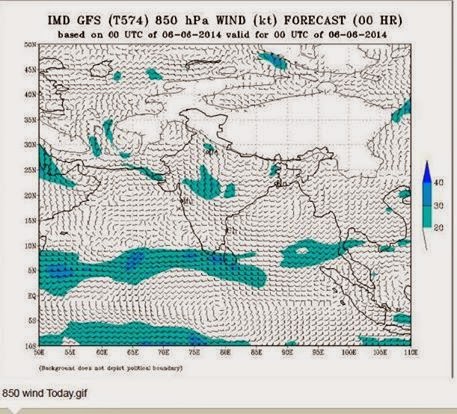 (Vinson Kurian, TheHinduBusinessLine) The southwest monsoon made a triumphant entry into Kerala on Friday after a ‘blocking trough’ over land crumbled and ended its stiff resistance for a week. This made the way clear for it to make its lunge inward; the sea-based trough off the Kerala-Karnataka coast stretched out to its best possible for the flows to converge.

The offshore trough is a reservoir in the air that receives monsoon moisture and, in turn, regulates its onward flow into land as rain.

Therefore, its strength is crucial for the well-being of the entire monsoon system; the offshore trough was a feeble formation until Thursday evening. But the break-up of the peer trough over land meant that the flows would pick up speed in tandem and the offshore trough gain in strength.

India Met Department said that the monsoon has advanced into most of south Arabian Sea, Kerala, parts of Tamil Nadu, most of southwest- and parts of west-central Bay of Bengal. Its northern limit passed through Kozhikode, Coimbatore and Cuddalore on Friday.

This is an anomaly in that the onset over Kerala and the Northeast happens almost simultaneously – that is if the latter has not jump-started the other already.

It is a sad reflection also on the state of affairs in the Bay of Bengal, the southeast basin of which saw the monsoon sail in more than 20 days ago, only to stall midway.

Orderly advance of monsoon in the Bay of Bengal, marked by formation of helpful low-pressure areas, is crucial for the spread of rain in the farming heartland of the country.

It remains to be seen how the seas to either of the peninsula behave after a few international models feared that they would idle for most part of the season. But the Arabian Sea is threatening to disprove these forecasts if the buzz building around the Lakshadweep Islands is any indication.

Outlooks favour the formation of a weather system (low-pressure area/depression) in the region and its further strengthening. The development needs to be watched for implications for the monsoon system as a whole and its performance in central and northwest India.

Posted by Rajan Alexander at 10:51 PM