Why this year's drought can play total havoc with the economy 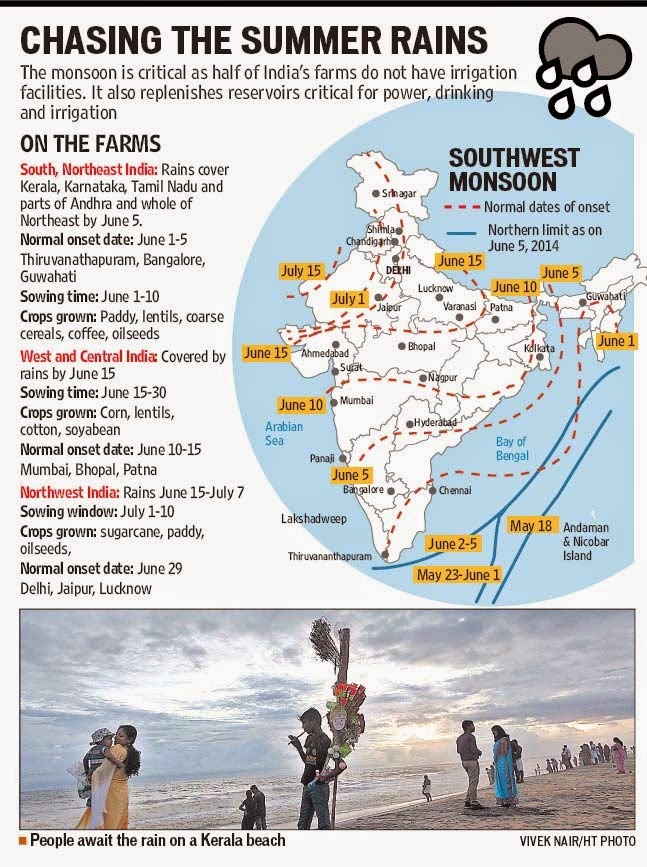 (HindustanTimes) The Kerala coast is likely see the onset of the monsoon by Thursday, after a week’s delay, but the rain-bearing system’s spread could be slower in June, a critical month for farm operations, predictions by a government climate agency shows.

An evaluation of rainfall variability by the premier Indian Institute of Tropical Meteorology (IITM) shows the rains would be confined largely to India’s western coast and the northeastern states until June 15, even though the rain-bearing system should normally cover nearly half the country by then.

India’s continues to fret over the possibility of a poor monsoon this year. Although these findings are not part of an official forecast, they add to worries about a drought, which can stoke inflation and pose an immediate challenge for the new NDA government.

Summer rains are significant because two-thirds of Indians depend on farm income and half of the country’s cultivated areas do not have irrigation facilities. Besides, the rains also replenish 81 nationally monitored reservoirs critical for power and drinking.

Plentiful rains boost rural incomes, which drive up demand for goods, and as a result manufacturing. For instance, rural consumers account for half of annual motorcycle sales.

According to the Met department’s official forecast released in April, the country is headed for a below-normal monsoon, amid a 60% chance of an El Nino weather pattern, which is known to lead to drier conditions.

El Ninos are marked by higher-than-normal sea-surface temperatures in the equatorial Pacific and their effects can ripple globally – from putting India and Australia at a higher risk of drought, while touching off floods in Latin America.

In 1997, one of the strongest El Nino years, rainfall was quite normal. Yet, in 2009, an El Nino triggered India’s worst drought in three decades, sending food inflation to an 11-year high of nearly 20% in December that year. Yet, much depends on how the weather pattern pans out.

“hamper” the “establishment” of the monsoon over the Indian mainland in June. The monsoon’s progress will be “slackened” till June 15, it says, adding that the system would reach central India as a “feeble current” by June 20 and advance into the central states only after June 25. 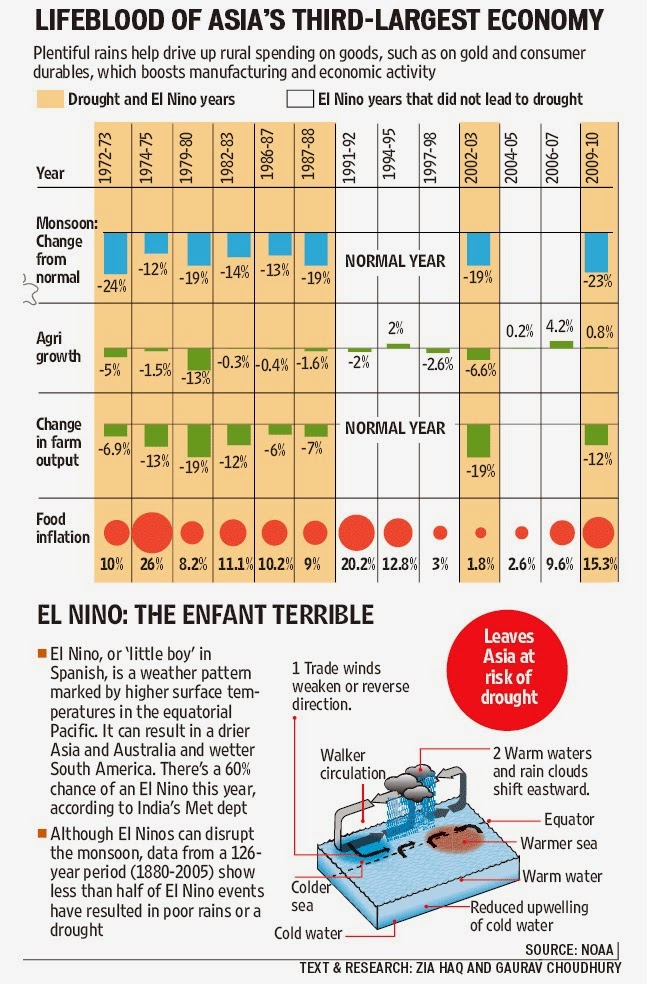 The rains act as a strong check on food prices, which have on an average risen 10% in the past two years at the retail end. High food prices limit chances of the Reserve Bank to lower interest rates, necessary for improved industrial activity, since businesses rely on credit. Poor rains can also slow down broader economic recovery from the current “stagflation-like state” of stagnant growth and high inflation.

India has been lucky to avoid a drought for four straight years, helping post some record food output. Half of India’s annual food output comes from monsoon-dependent crops. Late or weak rains can delay sowing or stunt saplings. Forecasting the rains, which account for three-quarters of India’s annual rainfall, is becoming tougher.

In 2012-13, six states had to declare droughts despite predictions of a normal monsoon.

Posted by Rajan Alexander at 8:48 AM