Monsoon: The IMD keeps fingers crossed. Would declare drought only if July first half the rainfall deficiency continues 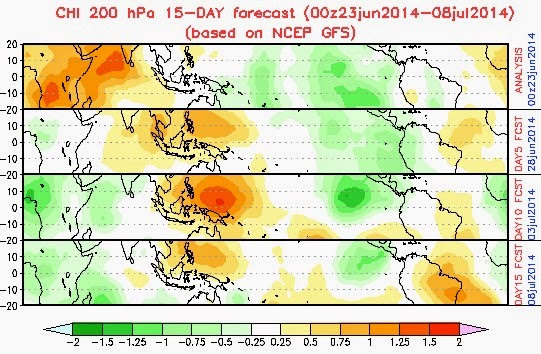 This is an extremely interesting interview.The IMD admits that their June rainfall predictions had gone completely amiss and they were taken back to find the deficiency as  steep as being experienced this month. Till yesterday the rainfall deficiency is 37% and they hope to make this up during July and August. Since sowing in most parts of India takes place as late as mid half of July, they would get worried only if the monsoon does not pick up till then.

Notice the IMD is not giving any concrete reason based on any expected change in any of the key variables behind their "optimism" of monsoon pickup during July-August. As seen above, except for July 3-8th, the Madden Jullian Oscillation (MJO) looks pretty bleak.The Indian Ocean Dipole (IOD) has entered into its negative mode and looks to strengthen further during July.That presents an extremely negative scenario for the monsoon. Though international models indicate that Sea Surface Temperatures (SSTs) within the Nino monitoring area may temporarily lose steam during July,  current daily values in contrast indicate that by mid-July SSTs may actually cross Nino threshold values. Further the atmosphere is showing strong indications that it has started coupling with Nino SSTs and may cross Nino thresholds by mid June too.

Accordingly, in all probability the IMD will be compelled by mid-July  to declare monsoon failure by mid July. They appear just playing for 3 weeks time to postpone announcing this decision and hoping that a miracle happens  as it does so often the case with weather..Let us hope that it does so also... 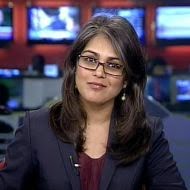 (MoneyControl.com) Since the date of onset of monsoon, most parts in the country have witnessed scanty rainfall. In the month of June the deficit recorded is 37 percent. Is rainfall deficit solely caused by El Nino ? What are the other reasons for this poor monsoon?


DS Pai, director, India Meteorological Department told CNBC-TV18’s Menaka Doshi and Senthil Chengalvarayan, that monsoons, so far, have only been delayed and the organization is expecting a better rainfall in the month of July and August.

According to Pai, in many parts of north-west India and also in some parts of central India the agricultural sowing starts in the first-second week of July. And so, if there is deficiency even in the first half of July, only then it will be a matter of concern. 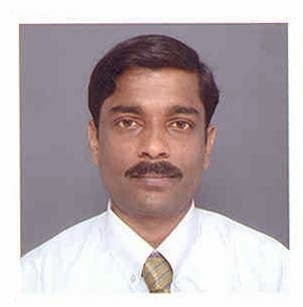 Menaka: To what extent has monsoon progressed across India and which are the states that are suffering considerable shortfall in the monsoon so far?

A: So far monsoon has progressed over southern part of Gujarat, most parts of Maharashtra and in south Kerala, Karnataka, Andhra Pradesh, Chhattisgarh and north eastern parts and upto north east Uttar Pradesh and east Madhya Pradesh. So far, the country as a whole has a deficiency of around 37 percent and region wise highest deficiency is in the central India which is around 51 percent. In the north-west India deficiency is around 45 percent, north east it is 31 percent and south peninsula it is 21 percent.

Senthil: How serious are the deficiencies, can they be made up in July and even if they are made up will they still affect crops.

A: Even in the last ten years there have been a few cases when July has been highly deficient. For example, in 2010, but it was made up during July and August, so around 30 to 40 percent deficiency of June can be made up if you get a good rainfall in July.

Menaka: But has this turn out for the monsoon been far worse than anticipated earlier?

A: In June we were not expecting such a deficiency. It is slightly more than what we expected. However, the deficiency is mainly due to the delay in the onset and progress of the monsoon over central India and northern parts. So there have been some delays of around one week to 10 days in many parts.

Senthil: What has caused the delay and is it likely to get better from here?

A: From December to May we had a lot of rainfall over north India and even central India due to western disturbances. This caused a lot of clouding and rainfall in some regions, extremely high above normal rainfall and these all had resulted delayed heating of the land. Generally, when land gets less heated, the monsoon pull up reduces. These have caused a weakened monsoon flow and resulting in delayed onset over Kerala as well as the progress of the monsoon so far.

Menaka: Your daily report from the IMD seems to indicate that it is north-west India and central India that is hurting the most and only 20 percent of India has received sufficient rainfall or normal rainfall so far. So is this a far worse outcome than what was predicted or anticipated by the IMD earlier in the year?

A: Till now only 23 or 24 days are over and there are still around 100 days left, so during July and August we should get better rainfall than June, so it should be within the figure as we are expecting which is around 93 percent.

Menaka: What is your current assessment of drought hit areas, where could we potentially see conditions worsen all the way to a drought?

A: Areas like central India which includes Madhya Pradesh and north-west areas like Rajasthan, Gujarat, Maharashtra and even west Uttar Pradesh have been affected. But there are deficiencies of around 20 to 30 percent in the north interior Karnataka, some parts of Andhra Pradesh and even Orissa as well.

Menaka: Are you in a position to raise a serious drought alert in some parts of Madhya Pradesh, Maharashtra and western Uttar Pradesh and Rajasthan?

A: We are expecting a better rainfall in the month of July and August. So as of now it is too early to say about the drought situation in all these parts.

Senthil: At what point would you start getting concerned, what will raise alarm bells for you?

A: In many parts of north-west India and some parts of central India the agricultural sowing starts in the first-second week of July. So if you start deficiencies even in the first half of July then we will be somewhat worried.

Senthil: But at the moment you are calling it a delay and not a failure?

Posted by Rajan Alexander at 7:41 PM