Amazingly, Skymet a private forecaster claims that the monsoon onset has happened not only over Kerala but as far north as Telangana except there is no evidence of it as precipation. 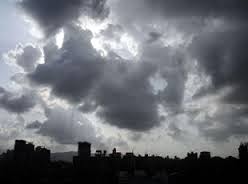 (TimesofIndia) A storm is brewing over the onset of monsoon as private forecaster Skymet has taken on the weather office and declared that the monsoon has already reached southern India, but the India Meteorological Department insists that the rainbearing system will land in the next 48 hours, in line with its forecast of June 5.

For Jatin Singh, CEO of Skymet, the monsoon has not just hit Kerala, it has reached Karnataka and Telangana also.

"As of now, most conditions (as set by the IMD) have been met for the onset of southwest monsoon over Kerala, according to us," he said.

BP Yadav, head of the National Weather Forecasting Centre at the weather office said rainfall has increased across Kerala, which was only one of the criteria.

"Monsoon is not only rainfall. There are other patterns including wind speed, clouding etc which have not met the parameters," he said.

The IMD says monsoon had been static for 10 days and is likely to make progress in the next 48 hours.

It says that monsoon's progress in June will be delayed and less vigorous due to feeble monsoon current. The monsoon activity in June will be mainly confined to west coast, north east India and southern peninsula as the Indian Institute of Tropical Meteorology (IITM) has issued the extended range forecast for next 20 to 25 days. Normally, monsoon covers central India (till Bhopal and slightly above) by June 15. However, the forecast says that the monsoon will be over peninsular India up to June 25 and may advance to central India afterwards.

"The rainfall would be confined to west coast and north east India upto June 15. The strengthening and progression of monsoon seems to be slackened till June 18. Monsoon would reach central India by June 20 as a feeble current,"

says the forecast. In its seasonal forecast, the IMD has already forecast a below-normal monsoon for the country taking into consideration the possibility of an El Nino phenomenon.

"Even when the monsoon will cover the peninsular India, it will not be vary vigorous as there is the anti-cyclone at the lower levels, which is attracting the winds from the north west instead of attracting them from the south west," said a meteorologist on condition of anonymity.

However, the forecasters have not linked the expected slackness of the monsoon in June with the developing El Nino.

The Australian weather office, which tracks the dreaded El Nino, has said in its update on Tuesday that El Nino is 70% likely to be developed by August.

Posted by Rajan Alexander at 8:33 AM