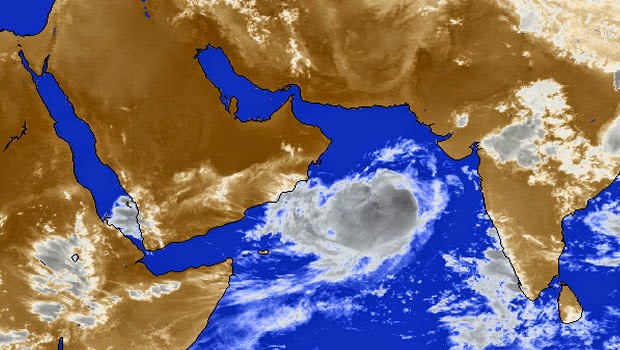 (Rahul Das in Oman Times) Tropical storm Nanauk is expected to hit the coast of Oman between Ras Al Hadd and Ras Madrakah on June 15, according to Oman's Directorate General of Meteorology and Air Navigation (DGMAN) and Public Authority for Civil Aviation (PACA).

At the time of reporting, storm was centred about 850km from Masirah Island and had an estimated surface wind speed between 35-45 knots.

"The tropical storm is expected to weaken gradually as it approaches the Omani coast," the statement added.

With wind speed reaching 30-35 knots per hour, the storm is expected to bring in 100-300mm rainfall in 24 hours all over the Sultanate, a senior official of the DGMAN said, adding the height of the sea waves may reach four metres. 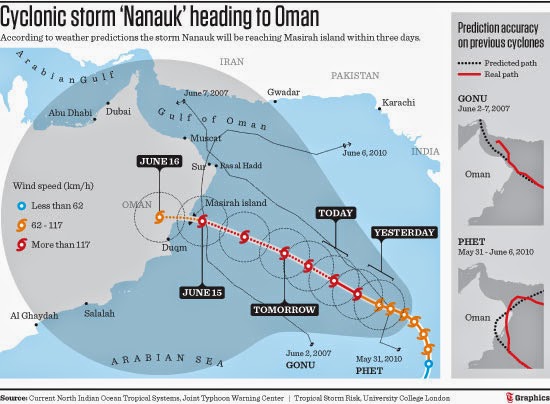 The impact of  cyclone is expected from Saturday to Monday. Heavy rains and high-speed winds are expected to lash North and South Sharqiyah, Al Wusta and Muscat governorates. The rapid intensification of the storm was expected given the conducive environment at the sea as well as in the atmosphere.


"A tropical cyclone in Oman occurs when the temperature on the surface of sea rises above 26°C," the official said.

M. Mohapatra, a scientist at the Cyclone Warning Division, India Meteorological Department (IMD), said that the cyclones are not frequent in Oman.

"In recent years, the cyclone Gonu in June, 2007 and Phet in June, 2010 had crossed the Oman coast. Both occurred in the first week of June.These cyclones develop during the onset and withdrawal of monsoon over the Arabian Sea," he told Times of Oman from New Delhi.

The north Indian Ocean has two tropical cyclone seasons - one in May and June before the southwest monsoon arrives, and one in October-November after the monsoon has departed.


Meanwhile, the IMD said that the tropical storm has been named as 'Nanauk' - contributed by Myanmar as per the regional cyclone naming protocol. It lay centred about 710km west-southwest of Mumbai, 590km south-southwest of Veraval and 850km east-southeast of Masirah Island yesterday evening.


"It would intensify further into a severe cyclonic storm during the next 24 hours. It would move west-northwestwards towards Oman coast during the next 120 hours," it said.