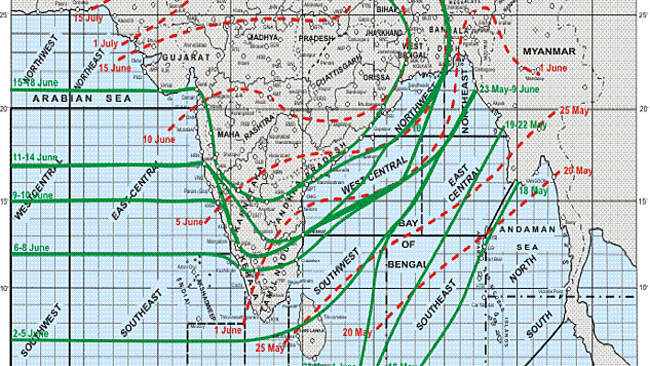 (Accuweather) Although the monsoon has made some progress to the north and west this week, advancement is still running about a week behind schedule in most places, but more than two weeks behind schedule in some parts of southeast India.

For the month of June, most of India has experienced below-normal rainfall, the exceptions are southern India, east of the Ghats where a storm brought heavy rainfall early in the month and also across northern India, just to the south and west of New Delhi where several days of thunderstorms have brought near- to slightly above-normal monthly rainfall.

Elsewhere, even areas already under the influence of the southwest monsoon are well behind normal in terms of rainfall this month. In Mumbai for instance, normal rainfall through June 18 is 352 mm (13.85 inches) while only 83 mm (3.27 inches) has fallen thus far.

Farther south along the west coast, rainfall is closer to normal but is still lagging behind despite recent downpours.

Recent rains in the northeast of India and across Bangladesh have begun to dent rainfall deficits; however, much of this region is also averaging only 40-80 percent of normal rainfall this month.

The area suffering the most is the eastern coast of India where the monsoon has only just arrived, despite an average arrival date of June 3 to June 10. These areas have received less than 25 percent of their normal precipitation this month.

With a generally weak monsoon expected, these numbers are unlikely to recover leaving much of India with below-normal rainfall over the next several months.

Across northern India, many areas continue to experience extreme heat ahead of the monsoon. These areas are also expected to receive below-normal rainfall for the season and are most likely to endure long-term drought as a result of the poor monsoon season.