A key factor why the current El Nino episode found immense difficulty in establishing itself was the lack of coupling between the Sea Surface Temperatures (SSTs) found in the Nino region of the Central Pacific and the atmosphere. Because of this, doubts were even cast whether any El Nino would be experienced this year as Nino STTs and Southern Oscillation Index (SOI) demonstrated diametrically opposite trends – SSTs signalling an El Nino while SOI signalling La Nina.

However, the 30-day SOI has been steadily declining since the most recent peak of +10.5 on 15 June to a value of +7.1 yesterday (23 June 2014). This decline has been driven by falling daily SOI values which have dipped into negative territory five times in the seven days to 23 June. If this trend continues then the 30-day mean will become negative in July; but that is by no means certain though highly likely. 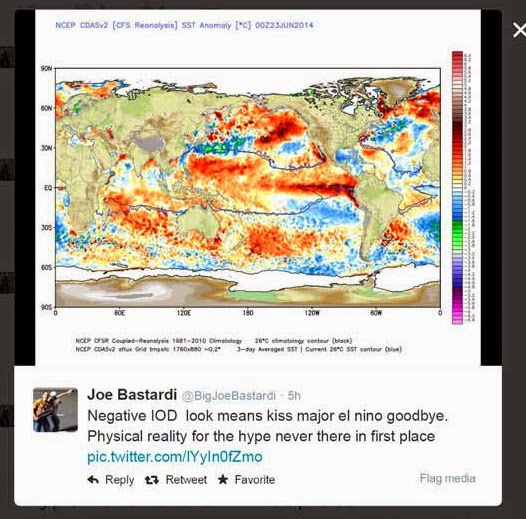 The SOI - a measure of the atmospheric pressure difference between Tahiti and Darwin in Australia and a lead indicator of El Nino conditions - does not currently indicate that a strong El Nino is developing.NOAA's computer model continues to forecast only modest warming of sea surface temperatures in the Pacific with the sea surface temperature anomaly  scraping into El Nino territory sometime around September and rising to around 1 deg C above the long-term average from around October and then remaining fairly flat.


For comparison the strong El Nino of 1997/98 produced a sea surface temperature anomaly of more than 4 deg C by the September of 1997 and the El Nino of 1982/83 produced an anomaly of +3.5 deg C, according to NOAA.  Expectations of a Super El Nino this year has accordingly considerably cooled, if not given up.

Posted by Rajan Alexander at 9:03 AM