Monsoon: 80% of India received only scanty to deficient rains

Not only rainfall received by the country had been scanty, its distribution had been extremely skewed. 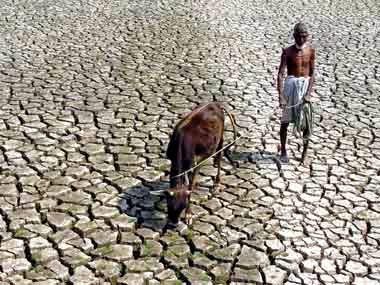 (EconomicTimes) About 80 per cent of the country has received deficient to scanty rainfall between June 1 and June 23, according to India Meteorology Department (IMD) data, deepening concerns about a below-normal monsoon that could hurt revival prospects and fuel inflation.

Things may not get better in the next few weeks--the extended range forecast of the Indian Institute of Tropical Meteorology (IITM), Pune, says that monsoon activity over the country will be weaker in the next 25 days that is until mid-July. India's southwest monsoon runs from June to September.

About 20 per cent of the country has received normal rainfall so far. Central India--Odisha, Chhattisgarh, Madhya Pradesh, Gujarat, Goa and Maharashtra--has the highest deficiency at (-) 51per cent rainfall in June 1-23. Overall monsoon rain in the country in June is set to be below normal as it's been confined to the west coast and Northeast India.

Sowing of key summer crops such as cotton, soya bean, pulses and coarse grains has been either delayed or they may have to be re-sown due to the absence of rain.