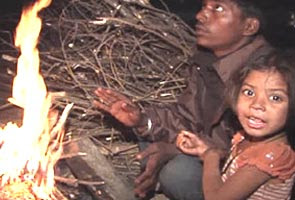 New Delhi:  At least 39 deaths, two blinding accidents, and over 90 trains cancelled or delayed - life was disrupted as the cold wave gripped north India on Monday with temperatures plunging to new lows and many states fogging out.

Delhi, Punjab, Haryana, Rajasthan and Bihar were enveloped in a thick layer of fog on Monday morning which slowed down pace of life and traffic across a large swathe of regions from Patiala to Patna. Many trains were either running many hours behind schedule or had to be cancelled.

In the capital, at least 29 trains were cancelled and 40 were running behind schedule while a dozen each were delayed in Rajasthan and on the Delhi-Ambala-Amritsar section. In many areas of Jharkhand, Bihar and Uttar Pradesh, the authorities were providing fire wood and cow dung cakes for bonfires at crossings for relief to passerby and homeless from the biting cold.

The early morning fog also led to some minor accidents, but at least two worst crashes were seen in Rajasthan. Eight vehicles, including a bus, fell into a small ditch on the Jaipur-Agra National Highway near Halena in Bharatpur early morning due to poor visibility. At least 30 people were injured. Later, two trucks and a car rammed into one another on the same road, killing one person.

Mount Abu recorded the lowest temperature in Rajasthan at 1.6 degrees Celsius while capital Jaipur recorded 5.6 degrees. In Bihar, at least 17 people have lost their lives because of the intense cold wave in the last four days. Parts of central and northern Bihar have been particularly reeling under severe cold with minimum temperature falling to 7.5 degrees Celsius in Gaya and 9.8 in Patna.

Jharkhand has seen at least 22 deaths in different parts of the state in last one week. However, the Met Office has withdrawn the cold wave warning in the state, saying the situation will improve from Tuesday and mercury will rise by one or two degrees. Ranchi was the coldest place in Jharkhand on Monday with the minimum temperature settling at seven degrees.

In Delhi, visibility fell to 200 metres in the morning.

"I had a tough time steering through fog. But this is just the beginning. It might get worse as the temperature dips," said Vivek Shukla, a school cab driver.

The minimum temperature fell three notches below average to settle at 5 degrees. The maximum was expected to hover around 18 degrees Celsius during the day. Many parts of Uttar Pradesh also were reeling under intense cold with Lucknow recording a minimum of 5.5 degrees Celsius. Agra recorded the season's lowest minimum temperature at 2.5 degrees even as all the night shelters reported full attendance. Traffic on the National Highway No.1 to Delhi was disrupted because of low visibility caused by dense fog.

In Jammu and Kashmir, the state Met office issued a travel advisory asking those undertaking the Srinagar-Jammu journey Tuesday and Wednesday to exercise caution.

"It is likely there could be a rather heavy snowfall in the Pir Panjal range," Sonam Lotus, director of the local meteorological office, told IANS.

The minimum temperature in Srinagar city was recorded at 3.4 degrees below the freezing point, while it was minus 5.4 in Pahalgam hill station. Leh, Ladakh's capital town, was the coldest at minus 13.2 degrees.

In Himachal Pradesh, Keylong recorded the state's lowest at minus 5.1 degrees, Shimla 3.8, Dharamsala 4.3 and Manali minus 1.6. The weatherman forecast snow in high-altitude areas and rainfall in mid-hills for Tuesday.

The minimum temperature at most places across Punjab and Haryana was between three to six degrees while traffic moved at a slow pace on most highways, especially New Delhi-Ambala-Amritsar national highway due to fog.

Posted by Rajan Alexander at 7:27 PM