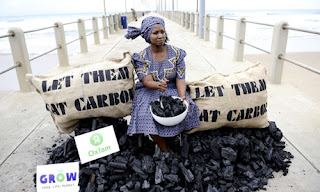 This mind bomb of Oxfam succeeded in grabbing media headlines as it was designed to do. The attempt was to prod negotiators at the Durban Climate Summit to get serious and arrive at a strong treaty through a message that if they don't, people would be left no option but to eat carbon.

It was eye-catching enough to grab attention and convey the important information in an instant. Combined with humour to carry this information, the result was a visual ‘one-liner’, a joke that speaks the message the ad intends.

But if Oxfam's PR Department is giving themselves a pat on their own shoulders, they need to think again. Did it help  negotiators at the Durban Climate Summit to get serious? No. More seriously, how on earth did they think they could get away by treating eating carbon as some kind of joke? This brings us to the question - what exactly is the kind of diet Oxfam staff feeds on? Silicon?

I suppose it would come as a shock to Oxfam to discover whenever we ordinary mortals bite into an apple, steak or dish of ice cream, we're sure to get plenty of one type of element: carbon. Because carbon is present in all known forms of life, every food we eat contains carbon.

Carbon is unique in its ability to form large, diverse molecules because of the way it forms electronic bonds with other atoms. The chemical bonds carbon forms allow it to form long molecular chains essential to life as we know it.

Large carbon-based molecules are called organic macromolecules. There are four major groups of macromolecules: fats, carbohydrates, proteins and nucleic acids. All four share the basic property of having a carbon atom "skeleton," but differing chemical properties mean that each type of macro-molecule has a unique function in diet and health.

So bad enough Oxfam committed a faux pax but it becomes much worse that their advertisement has gone viral over the internet as the resulting cheap publicity  only succeeded in exposing  the level of scientific illiteracy the pervades their organization. And to think Oxfam chooses to lecturing and haranguing the rest of the world about the great climate apocalypse coming unless we take action now; arrogated themselves the role of a key driver of inter-governmental negotiations and advocating policies they themselves formulated. Thank God for the Durban Summit coming to naught!

It is pathetic that Oxfam arrogates itself to speak on behalf of developing countries only to succeed in sounding more and more as the British Crown. They can be more successful align themselves to the voices of the developing world if they take a cue from India's Environment Minister's stirring speech that won her a standing ovation in Durban:

"Equity has to be the centrepiece of the Climate discussion and our negotiations should be built on it," she underlined. She insisted that "we cannot accept the principle of CBDR to be diluted. The firewall of CBDR must not be broken. Equity in the debate must be secured." Noting that India has taken "ambitious steps" to address climate change, she said Prime Minister Manmohan Singh has announced that the country's per capita emissions would never exceed that of developed countries. "We have pledged to lower our emissions intensity of our GDP by 20-25 per cent by 2020."

She said a recent report from Stockholm Institute has noted that the mitigation pledges of developing countries amount to more mitigation than that of developed countries.

"What we demand is for existing commitments to be met. What we demand is comparability of actions. We demand that the emissions gap must be bridged." Natarajan said that there should be "clear time-lines" that advance the actions and ambition of parties. "We should have an ambitious implementation phase till 2013 and then go to the Review in 2013-15 to make an assessment based on science and commitments," Natarajan said.

"We should then begin work on the arrangements... We should not confuse legally binding arrangements with ambition. We need commitments, not mere hollow promises," she underlined. Besides the question of India, China and the US agreeing to a new treaty, texts dealing with the Kyoto Protocol and the Long-Term Cooperative Action, the two main tracks of negotiations, are also being studied. There is concern, however, that ministers and negotiators may have to catch their flights before any agreement can be reached."

Posted by Rajan Alexander at 6:23 PM