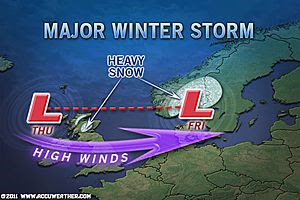 High winds, slashing rain and heavy snow will whip areas of Northwestern Europe from the United Kingdom to Scandinavia on Thursday and Friday.

Travel by road, rail, sea and air will be subject to delay or cancelation.

The worst of the storm will target northern and central UK, along with the nearby Irish Republic, on Thursday into Friday night.

Heavy, wind-blown snow will cover higher ground in Scotland, where open areas of the Highlands could get a blizzard. Snow will also lay over hills of Ireland to northern England.

Thursday night and Friday, the storm center will shift east to Scandinavia. At this time, the highest winds on land will target coastal areas of Denmark, southern Sweden, northern Germany and Netherlands.