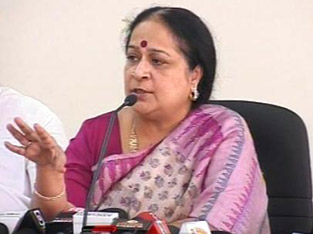 Environment Minister Jayanthi Natarajan Saturday made an emotional appeal to the rich countries, asking for space for basic development for its 1.2 billion people and eradication of poverty.Speaking at the ministerial session on the last day of the UN climate talks in Durban, Natarajan said:

"India is asking for space for basic development for its people and poverty eradication. Is this an unreasonable demand?"

She contested the principle of equity -- right to grow -- saying it should be the centrepiece of the climate discussion and that negotiations should be built on it.

"We cannot accept the principle of common but differentiated responsibility (CBDR) to be diluted. The firewall between rich and poor countries must not be broken," she said.

The minister, who got a standing ovation after she finished her speech, said she was astonished and disturbed by the comments from Canada who pointed at India for not agreeing to a legally binding agreement.

"I am disturbed to find that a legally binding protocol to the convention, negotiated just 14 years ago, is now being junked in a cavalier manner. Countries which had signed and ratified it are walking away without even saying a polite goodbye. And yet, pointing at others," she said.

Some countries, including Canada, do not want the second commitment period of the Kyoto Protocol -- the only existing regime that caps greenhouse gas emissions.

"It would be helpful if we do not talk at each other and do not prejudge each other," she said.

Natarajan rebutted charges of holding up the process at Durban.

"We are not saying nothing should be done now, or no action should be taken. On the contrary, we are asking that the actions of the developed country parties must be reviewed," she said.

Posted by Rajan Alexander at 4:57 PM