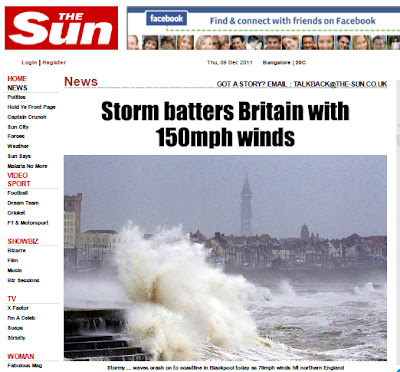 BRITAIN was battered by winds of more than 150mph today as a monster storm hit land. Widespread travel chaos affected most of Scotland and many homes were left without electricity.  Authorities ordered the closure of thousands of schools and motorists were advised not to drive across central areas as Britain's first major storm of the winter arrived in spectacular fashion. Assistant Chief Constable Allan Moffat of Central Scotland Police warned:

"People could be putting themselves at considerable risk by travelling in these conditions."

The Met Office forecasting service issued a "red alert", their highest warning, as the storm tore across Scotland.Many train services and ferries to islands off the western coast were cancelled and every major bridge in Scotland was closed.A small number of flights to and from Glasgow and Edinburgh airports were also axed.

Gale-force winds churned up the sea along the coast and rivers burst their banks, sparking floods and adding to the mayhem for motorists. A top wind speed of 151mph was recorded in the Cairngorm mountains in the eastern Highlands, the Met Office said. While Central Scotland was lashed by winds of up to 85mph.

A lorry blew over in the Highlands and a large tree smashed into a car in Fife, eastern Scotland, but there were no injuries. Scotland bore the brunt of the bad weather, but England was also hit. In Cumbria, north-west England, heavy rain caused flooding, with road closures and reports of vehicles stuck in water.

The Met Office warn that arctic air blowing in could see snow fall as far south as Birmingham tomorrow as the west of England is told to expect as much as four inches. London could see winds of up to 55mphand the Midlands and north Wales have been told to be "aware".

The Government has warned hospitals to be prepared for an influx in patients with its first winter health alert of the year. Met Office forecaster Dan Williams said:

"We have issued a level two (yellow) alert in conjunction with the Department of Health to let vulnerable people know about the cold weather and so health services can get their resources ready."

This time last year the country was brought to its knees by snow which closed schools, delayed flights and forced motorists to abandon their cars on the roads.

Posted by Rajan Alexander at 11:46 PM