Kumi Naidoo, Greenpeace: We received a knockout punch in Durban! 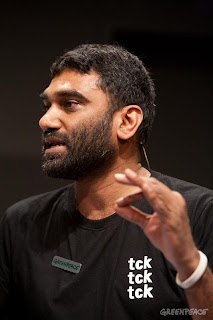 On the closing of the latest round of UN climate talks in Durban Greenpeace today declared that it was clear that our Governments this past two weeks listened to the carbon-intensive polluting corporations instead of listening to the people who want an end to our dependence on fossil fuels and real and immediate action on climate change.

“The grim news is that the blockers lead by the US has succeeded in inserting a vital get-out clause that could easily prevent the next big climate deal being legally binding. If that loophole is exploited it could be a disaster.

And the deal is due to be implemented ‘from 2020′ leaving almost no room for increasing the depth of carbon cuts in this decade when scientists say we need emissions to peak,”

“Right now the global climate regime amounts to nothing more than a voluntary deal that’s put off for a decade. This could take us over the two degree threshold where we pass from danger to potential catastrophe.”