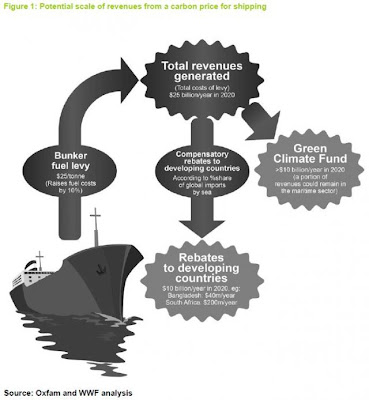 Oxfam, WWF and the International Chamber of Shipping,have proposed a global shipping tax in order to ensure that there isn’t “carbon leakages” from sectors not regulated under a less than global taxation mechanism. The Climate Action Network consisting of over 700 NGOs is demanding that the GCF is funded by such public sources of finances, as well as other possible sources of funding, such as special drawing rights, but, discussions on sources may be shot down before they get out of the blocks.

Here’s the briefing prepared by Oxfam in pdf form: WWFBinaryitem24585  Tim Gore and Mark Lutes are listed in the properties of the document as the authors. Tim Gore is from Oxfam Great Britain and Mark Lutes is from WWF.If they get their way, international shipping would yield a key financing source for the proposed Green Climate Fund.

Rumours are circulating that Oxfam managed to get one of their consultants, Antonio Hill  listed under the Bolivian delegation in the official list of participants to push this nefarious agenda.If this proposal is adopted at the Durban Climate Summit, this step would increase the inflationary pressures on global food prices and starvation which the UK charity in the same breadth claims it wants to eliminate. 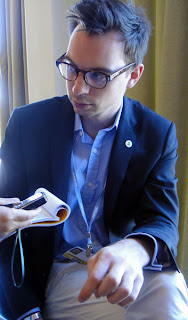 A concrete source of climate fund has been raised in a U.N. text for the first time, suggesting raising money by capping emissions from the shipping sector to help developing countries tackle climate change. The text, released and implemented by the International Maritime Organization (IMO) on Tuesday in Durban, South Africa, proposes that money raised by "specific actions" to reduce emissions from maritime bunker fuels, which could be used to finance climate adaptation through a Green Climate Fund. Tim Gore, policy advisor for Oxfam, said:

"Delegates are starting to see that international shipping is the most promising new source of finance for the Green Climate Fund. Support for this proposal is coming from a growing number of developing and developed countries, but it will be for ministers to decide if a deal can be cut here in Durban. The draft did not define whether revenues would be raised by a levy.

We cannot allow the Fund to kick-off as an empty shell. It is essential that negotiators defend this text and ensure it is part of a final package at the end of the week."

International shipping accounts for around 3.3 percent of the world's man-made carbon dioxide emissions and could grow by 150 to 250 percent by 2050 if regulation is not in place.

Last month, campaign groups Oxfam and WWF urged a carbon price of $25 per ton should be applied to shipping fuel (known as bunker fuel) to help cut emissions and generate $25 billion a year by 2020.

Posted by Rajan Alexander at 1:02 PM