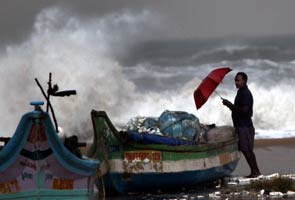 New Delhi: A severe cyclone packing wind speed of over 129 km per hour is expected to hit Puducherry and four Tamil Nadu districts in the wee hours Friday bringing heavy rains to the region.

Cyclone Thane, which has been brewing in the Bay of Bengal since Sunday, is expected to impact Puducherry and Tamil Nadu districts -- Chennai, Kanchipuram, Tiruvallur and Villupuram -- between 4 a.m. and 6 a.m. tomorrow, IMD Director General Ajit Tyagi said here.

The weather officer has advised local administrations to evacuate people from low-lying areas as thatched roofs and huts are likely to be damaged extensively and escape routes are also likely to be flooded.

"Storm surge of about 1-1.5 meter height would inundate the low lying areas of Puducherry and Chennai, Tiruvallur, Kanchipuram and Villupuram districts at the time of landfall, he said, adding that the standing crops of rice, maize and groundnut may be damaged.

The weather office has also asked for complete suspension of fishing operations.

"Farmers are advised to drain out excess water from the field to prevent crop damage. For taller crops like banana, the leaves may be removed and extra physical support may be given," he said.

A weather scientist said the cyclone Thane would probably be half in intensity than that of the super-cyclone that struck Orissa in 1999 which packed wind speed of more than 220 km per hour.

Posted by Rajan Alexander at 10:24 PM